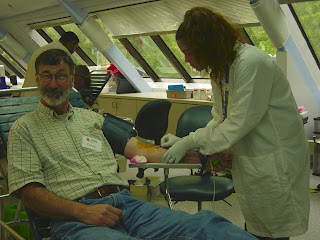 Since we’ve retired, we’ve looked for excuses to take walks. For instance, if I suddenly need a little plastic mountain goat, and never mind why, then off we go six miles into downtown and come back with one. So when I made an appointment to give blood at Red Cross (2.6 miles), I invited Dave along. He hesitated. “You’re supposed to drink extra fluids afterwards,” I wheedled. “There’s a brewpub a few blocks from the Red Cross that pours $2.50 pints on Tuesdays.” Sold!

I’ve been giving blood for almost forty years, so I have an impressive tally of pints shed. The people at the blood donor center invariably express their gratitude and make it seem as though I’ve done a really stellar thing. I haven’t. If someone, right now, told you she’d do something to you that stung for a nanosecond in exchange for a nap on a lounge chair and a faceful of donuts, would you go for it? Me too.

But Dave has always refused to go. Needles give him the willies. “If they can take it with a knife, I’m game,” he always says. He doesn’t have many vulnerabilities, but if you Tivo the scene in that movie when Nick Nolte is getting a huge needle in the knee, you can get a whole lot of mileage out of it.

Dave says he did try to give blood once as a teenager but it was a dreadful experience, right up to the point where everything went black. He has a long way to fall, and witnesses reported the moaning sound triggered the Doppler effect. For a few days they just swept around him. Empires rose and fell.

But the man do love to walk. We took off for the Red Cross. I reassured him that they never miss my vein, even though it’s small and invisible, whereas his veins jut and jump like cobras. Still, I looked around for one of the exceptional blood-drawers for him. You want a phlebotomist who shows a lot of confidence. Unfortunately, that doesn’t weed out the sadists. Dave drew the fellow with the wild grey mullet and the Jack Nicholson leer, and that fellow had at him for several minutes, reducing his left arm to pulp, until the trainer stepped up and offered to take a stab at it.

The trainer, opting for the next arm over, went for a quick and graceful poke, then another, then another ten or twelve, and finally, through sheer force of will, he drilled in and mined some sort of deep aquifer and the well sprang forth. Dave’s expression was rigid and staring. A young man nearby fainted dead away.

Nevertheless, eight weeks later, Dave again accompanied me to the Red Cross, theorizing it couldn’t be worse, and it wasn’t. It was exactly the same. Bruises in both arms bloomed like oil slicks on the sea, and days later folks were still edging away from him in the grocery line. I wouldn’t have blamed him for calling it quits. But last week he accompanied me yet again. This time he had gone for the Needlephobe’s Perfecta. He had spent that very morning at Kaiser getting a cortisone shot in his frozen shoulder. Was it a huge needle? I queried, as we walked to the blood donor center. Dave shuddered. “The guy who pushed the plunger in was in the next room,” he said. At the center, we got ourselves settled into the lounge chairs. Dave was approached by a pony-tailed young woman who might have passed for thirteen. She sized him up, flicked her need 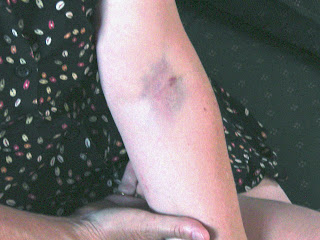 le and slid it home, and Dave’s blood leapt up and shot out into the bag in four and a half minutes.

Meanwhile, my blood was drooling out, spiraling down the tube with all the gusto of a seven-year-old on his way to bed. A team of phlebotomists stood around with frowns and thumped my arm and jiggled my needle and made fretting noises. Fifteen minutes later, my life force was still dribbling into the bag in a manner usually described as “ebbing away.”

Both Dave and I have fine blood–A+, in fact, although Dave points out, that according to the DMV, I got an F in sex–and I hope our respective pints will have some salutary effect on somebody, somewhere. Although whoever gets mine might have to be patient.