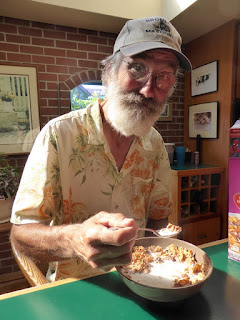 I’m not actually sure of that. He eats Raisin Bran, and it always seems to give him splinters. We didn’t have Raisin Bran when I was growing up. We were strictly a Cheerios and Frosted Flakes family. My college boyfriend’s mom introduced me to Raisin Bran and it made me wonder what else my family had deprived me of. I would’ve moved in with her on the spot but then she brought out a platter of chopped liver and I loved Mom and Dad all over again.

Anyway it’s nice to know they still sell Raisin Bran, although the brand has succumbed to the American demand for a paralyzing number of choices. You can get Regular, or you can get it with Frosted Banana Slabs, or Fruit Pucks of various provenance, or Golden Gooey Grain Globules. All still contain genuine splinters.

What finally got me interested in the cereal was the little game they printed on the back of the box. It really brought me back. Yes! It’s Spider-Man, and he’s in the city, and you’re supposed to find the little cameras, the green shirts, the tiny spider-men, and the backpacks! In spite of evidence I had other things to do, I spent some time looking for them. It’s not hard, but neither are the other games they used to print on cereal boxes. We loved them. We had time for them. There might be a Treasure Hunt game and you cut your little playing piece out of the box and move it along the path, and try not to land on the shark or the pirate. Or there might be a maze and you take your pencil and scribble your way out. 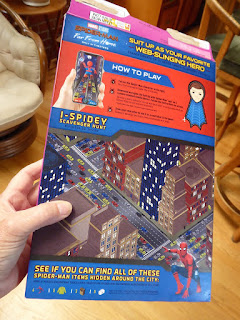 The games were like the things they’d print in Children’s Highlights magazine. To this day if I see the cover of a Children’s Highlights I can close my eyes and smell a doctor’s office. You might have to look at apparently identical pictures and see how many differences you can find. (Somebody is always missing a foot.) You might have to hunt for all the things that are wrong with a picture. It helped pass the time and block out the Antiseptic Aroma Of Doom in the waiting room.

Dang it, we had real games back then. We didn’t hunch over no damn phone. We were down on the rug with real winks to tiddle. We had real metal Chinese Checkers boards and the marbles went bang bang bang bang. We had real pick-up sticks that really could take an eye out.

So the Raisin Bran box brought me back. It was old-timey. The more I looked at it, the easier it was to peer into the past, where kids wearing jaunty caps and knickers rolled hoops with a stick, or flang cowpies. My land! If I looked a little harder, they were squatting in loincloths in the sun tossing knucklebones from a sheep. Looked a little harder and…

Oh crap. The directions on the Raisin Bran box are to cut out the Spider-Man character from the box. Then download and open the Suit Up With Spider-Man app on a camera-enabled mobile device. Then scan the character to use it as a controller in the game.

And just like that, the smart phone is back at the breakfast table. Screw that. I already found all the items. Old-school.

(Looking over my glasses.)