A Mishappening In The Genitals 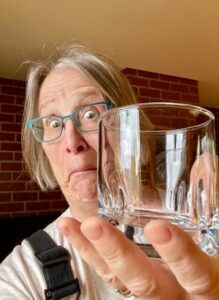 Give me a mild dot of pain somewhere for one minute and I’ll jump straight to a cancer diagnosis. That’s how I roll. But my symptoms never approached the severity of a Tunisian woman’s recent urinary tract infection, nor would I have had sufficient imagination to suspect the problem was a glass tumbler in my bladder. But that is what it turned out she had.

I didn’t even know you could get a glass tumbler in a bladder. Nobody drinks water that fast.

There are ways. The way she might have done it was to put the tumbler (first) in her vagina, and then (second) forget to take it out. It’s normal to come up one glass short so nothing about that situation flagged anything for her.

This particular tumbler was left behind for so long that it irritated the vaginal lining right through to the bladder, which is its immediate neighbor to the front. This caused a fistula, or a non-traditional connection between body parts, and it is assumed the tumbler migrated. I do not know that if you have enough little extraneous tunnels between organs you could squirrel away an entire crockery set, or whether the water glass will naturally gravitate to the left of the wine glass, with the soup spoon to the right, or not. It seems handy, in a way, like if your uterus needed to borrow a cup of bile. I find the whole idea a little concerning though. I’m a compact individual of economical stature and everything in me is near everything else, so God knows what could happen.

You’re really not supposed to have volunteer connections between body parts. For instance, the vagina is designed to have a particular pH that it does not share with the bladder. It is fairly acidic, which protects against parasites, bacteria, and fungi, besides being good for blueberries. The vaginas of women past menopause become significantly less acidic. Hell, life in general gets more basic when you’re old.

Many accounts of the Tumblering In Tunisia report the woman inserted the glass into her urethra by mistake, which is entirely believable—just last week I accidentally shoved a gallon flower pot up my ass and barely noticed it. She did remember she had once used it as a sex toy. The bendy straw was never recovered.

But people do hide various objects in their vaginas for all sorts of reasons. A woman being booked into jail in Tennessee popped a loaded gun in hers, but she was then charged with introducing contraband into a penile facility. I’m not hostile to males, but I think it’s rude to refer to someone’s vagina as a penile facility.

In the interests of promoting public health, I hereby append the following warning from Get India News, verbatim:

According to reports, she inserted the glass into her urethra instead of the vagina which was very dangerous for every woman. If some women try to do this, then we warned you that our genitals parts are very crucial for us. If something mishappened to our genitals part then it will guarantee that it will become a bigger issue for women and men also. People have to take care of their genitals parts. God has made this for some purpose. This thing will happen to anyone. If the Tunisian woman has made some precautions then she has not had to face the situation.