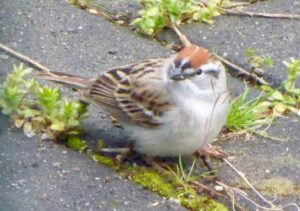 You don’t have to be any good at birding to like birding. With birds you get beauty, comedy, and a lesson in paying attention, and even a tiny bird can drive the headlines right out of your head.

I, to take an example, am not good at it. But it occurs to me I’m getting better.

The two main reasons I’m not good at it are my eyesight and my Magic-Erase memory. If I get any more nearsighted my eyeballs are going to flatten out like throat lozenges. And this morning I aimed my Merlin Song ID app at what turned out to be a Bewick’s wren for the fourth morning in a row. I’ll do it tomorrow too.

Nevertheless some information seems to have burrowed into the brain-hole often enough to get gummy and stick. I can prove it by my shiny new Chipping Sparrow. Ain’t it purty? It was hopping along our patio. I took a photo of it and hauled out my field guide and had it narrowed down to chipping sparrow with a backup juvenile white-crowned just in case. And I flang it on the internet, where my birder buddies quickly confirmed my bird.

In the field guide the range appears to be every the hell where, and the description is disparaging at best: “common” and “widespread.” I’m sorry, but fat-shaming a bird says more about you than about the bird. Plus, if it was so dang common, why hadn’t I noticed it?

But then the congratulations rolled in, and the suggestions that it was a pretty good find for my particular area, and maybe just bopped through a few times a year, and I felt better about myself. Also, it occurred to me that the very fact I photographed it shows I have learned some things. For most people (non-birder division) this sparrow would have registered as another Little Brown Job. But somehow I knew it was different. I did the same thing with a Purple Finch a while back. Clearly, I have at least learned some of the birds that this one was Not. Yay!

I garden on a double lot in the middle of the city. It’s not the worst bird city and there are all sorts of cool species in the copious Doug Fir remnants of our original forests. And sometimes it seems like bald eagles are thick as pigeons around here. But my back yard is sort of a starter yard for birding. Baby’s First Aviary. There are going to be about fifteen regulars I’m likely to see and that leaves a lot left over to stand out, should they ever show up. 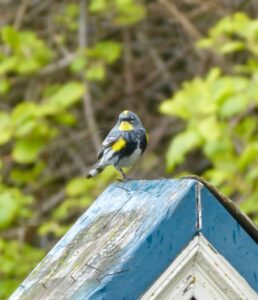 My friends Sara and Kelly also have a back yard in the middle of a city (Toronto counts as a city even though it’s across the official dotted line) and it’s actually a very diminutive back yard but there are so many species in it that their feathers are rubbing off just trying to sidle past each other. Their back yard is a major stop on the Atlantic Flyway and mine isn’t. You stand under the Atlantic Flyway and warblers will rattle across the sky all day and all night like God’s confetti.

Meanwhile, the Pacific Flyway might occasionally poot out any of four warblers in my yard. I have to go somewhere else to find more.

Don’t think I won’t. The headlines alone will drive me out.