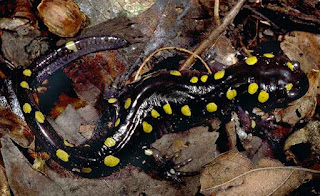 Daddy and I always went out salamandering in the springtime, so we knew where all the best spots were. When it was looking to be a fine warm wet night, he’d grab his camera and flashlights and we’d hit the vernal ponds looking for spotted salamanders. Because if a puddle party of spotted salamanders doesn’t inflate your soul, you’ve got more problems than can be addressed in church. 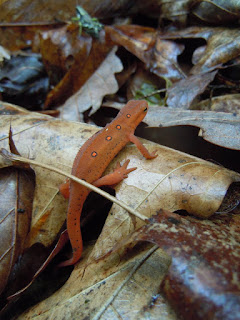 So he was the first to notice when they started paving them over. Ditches were gratuitously filled in, damp spots were erased. As an educated man who married a nice Lutheran woman, he didn’t have access to a lot of salt in his vocabulary, and had to make up for it with actual eloquence, delivered in a preacher’s cadence and for the benefit of nobody’s ears but mine. The powers that be had seen every pond as a seep of contagion and an eyesore, and done their damnedest to eliminate them. I was young, and certainly understood the value of spotted salamanders, and if they represented even half the worth of the ponds, that made them quite worthy enough. Daddy had even more knowledge in the bank. I remember swatting bugs one hot summer day and whining “What good are mosquitoes anyway?” and Daddy didn’t miss a beat. “Frog food,” he said. Well then. Okay!

People are, collectively, stupid. They’ll take an axe to an oak if they need a toothpick in December, and then complain about the lack of shade in July. Individual people can be pretty smart, but they get together and stupid right up. 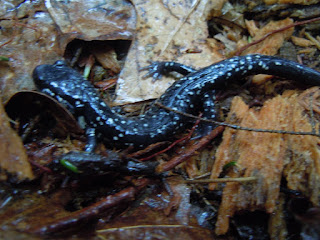 It takes time and attention to learn what there is to learn in this world, but people, collectively, know a lot about wetlands now. All those boggy spots might appear to those without imagination to be worthless, but those people are as blind as they can be. Wetlands mitigate flooding, restore shorelines, filter water, sustain life, cache groundwater. For free. The Army Corps of Engineers can get as fancy as they please with concrete but they can’t come close to duplicating the value of the wetlands, and they don’t come cheap, neither.

Someone recently lurched into power with a promise to drain the swamp. A lot of people think he has broken that promise, because they see he has packed the pus-pockets of power with even more privateers and pirates than we had before. But they didn’t take him literally enough. The other day, just taking a break between drowning refugees and jacking off the Big Oil boys, he drained the swamp. He put the boot to the Clean Water Rule that protects wetlands. Apparently, it cuts into golf course profits.

Some people can look right at the magnificent, unmatched genius of nature and see nothing of worth–nothing as valuable as, say, a Walmart on a slab. Two main reasons: they’re greedy, and they’re stupid. Don’t underestimate the stupid. And so the trees come down, and the swamp is filled, and the concrete flows, and the Walmart pimples up, and the true bill is left for someone else to pay, down the line. 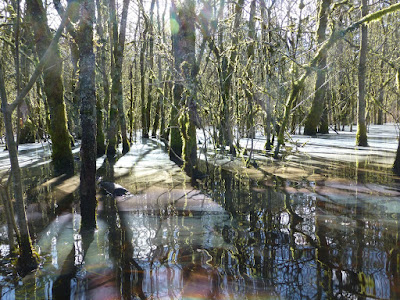 That’s who is in charge now. Someone who will mine your organs for their value on the black market and then rig you up with a respirator and dialysis and say, See? Good as new! Bummer about your liver. But some day someone’ll come up with a replacement for that, too. The best replacement, a beautiful thing, like you wouldn’t believe!