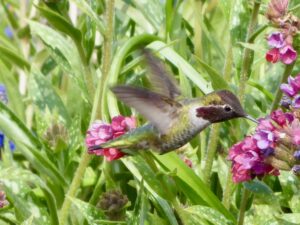 This time of year makes me feel fizzy. Like when you have some money down in Cow Poop Bingo and the cow is wandering real close to your square, except instead of cow poop it’s fluffy little birds and instead of money it’s joy. In nesting season, it almost feels like you’ve got genitals in the game yourself.

I’m surprised everybody isn’t paying attention to this flurry of activity, but then again I spent many a decade being oblivious. Birds pay attention to us but for the most part they’re absolutely fine with us ignoring them, and in fact go to some trouble to see that we do. So birds and their love lives are not on most people’s radar. 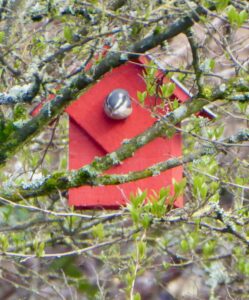 The first year we were in this house–45 years ago!–we had a bunch of dead wisteria debris on a porch overhang and I thought it looked untidy, which is not at all how the local house finch population saw it. I swept it all off and promptly dropped an entire working house finch nest onto the porch complete with tiny damaged birds in the goober stage, and lost them all. Of course I felt awful but it wasn’t much of a nest, in my opinion. I had no idea they’d just drop some sticks on the house and call it a day.

Soon after I took the hedge trimmer to the laurel hedge (motto: I will eat your house) and promptly whacked through a robin’s nest that was deep inside. Of course I felt awful but that didn’t stop me from doing the exact same thing at the exact same time the next year. After that I started to pay attention.

So now if anyone zips by with sticks and grass and stuff in their pointy parts, I try to see where they’re going. Mostly they’re going up in the big firs next door. Or ducking under a shrub, in the case of the song sparrows and juncos. But I hold out hope for fluffy tenants in my two official bird houses. Nuthatches look to be putting in an offer on the new red one. But the standby, the old Windowson place right outside my second-story window, doesn’t seem to be of interest to anybody. Maybe it’s haunted. But also the sheltering tree fell down a couple years ago. Studley and Marge went for it out of sheer habit but it’s not the best location location location for new folks. 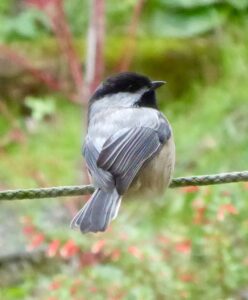 I still have hope, though. For one thing, a chickadee with a white back showed up a month after Studley disappeared. Ghost Studley!! And hung out for quite a while, although I haven’t seen him lately. But there’s another chickadee hanging out and two weeks ago he showed up with a bum foot. Just like Studley. He’s got it balled up in his fluff but I finally saw he’s missing toes on his left foot. Just like Studley. Holy cow, people. Could I end up as the favored mealworm purveyor to yet another differently-abled chickadee?

Here’s one thing you should know about me. I’m one of the least woo-woo people you’ll meet. I know and love woo-woo people but I personally have no talent for it. I’m not the sort to get messages from the great feathered beyond. So Ghost Studley and New Slewfoot Studley are, I’m certain, random aberrations.