It Came From Out Of The North 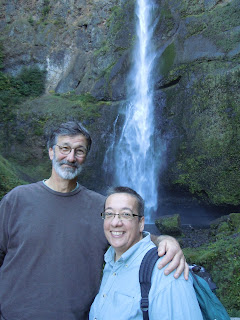 I am deeply interested in international relations, and that is why I was so pleased to have my friend Sara Stratton visit. Her personal awesomeness did not factor in at all. Sara is from the great state of somewhere-in-Canada, a landmass celebrated for its northness, but she speaks real good English. I couldn’t wait to show off our corner of the world, and we have a lot of good material to work with.

It started out great. We set off to explore the wonders of nature, starting with Dave’s neck, which is spectacular, and then moving off to the waterfall region of the Columbia Gorge. On our very first stop, we trotted down the path to a lovely cascade in front of which stood a young woman with, as Dave pointed out, no mistakes on her, who immediately removed a trench coat to reveal a pink bikini and high-heeled shoes. Tip: natural wonders are best presented with nonchalance. “Oh, a young woman with no mistakes on her in a pink bikini and high-heeled shoes in front of a waterfall,” we said. “They’re getting to be as bad as fruit flies around here.” 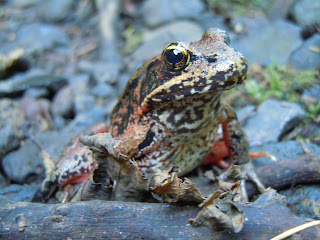 At the next lovely cascade, we scored a magnificent red-legged frog that was completely naked, so things were getting better and better. The remaining waterfalls came plain, and we rested up in Hood River for sandwiches and a hearty, nourishing beer so strong it could stand up without a glass and slap you if you nodded off. As we rounded the valley for a trip around Mt. Hood, Sara found herself so overcome by beauty and hops that she had to rest up her neurons, but by the time she woke up again, we had her 6,000 feet up the flanks of a snowy volcano with a raven in charge. The road downhill bounced with elk. Natural-wonder-wise, I’d have to say things were really going well. 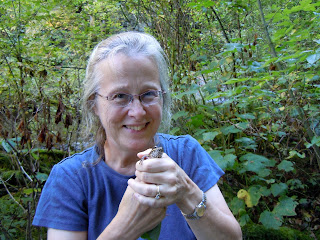 Now, you may have heard that the ancient Persian weavers always introduced a flaw in their carpets as a reminder that only God’s creations are perfect. The statement being made, as I understand it, is “I am exactly like God, except for this little boo-boo I am putting in on purpose,” which, you have to admit, is mighty humble. In this spirit, I decided to introduce a flaw into Sara’s perfect day by picking up a stray (“Willy”) in Rhododendron who had missed the last bus and wanted a ride into Sandy, twenty miles away. Sometimes I like to do favors for strangers to remind myself why I do it so seldom. I did think he looked dull and a little pungent, but I was wrong. Willy was thunderous stupid and loud and stank at least four different ways. Individual fugs of alcohol, pot, cigarettes and B.O. set up an intricate weather system in the back seat, where Dave, who is an awfully nice man, kept up a lively conversation while Sara and I counted mileposts as fast as we could. He had a lot of interests, foremost among them medicalmarijuana (what we used to call marijuana). For a living he made little screening boxes for medicalmarijuana, and in his off hours he liked to skateboard, use medicalmarijuana and miss the bus.

What is the sound of two brain cells flapping? 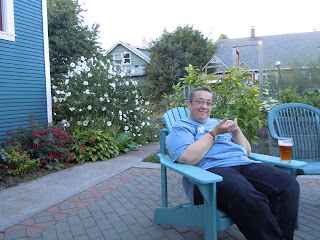 He mentioned he actually lived in Portland, so I was prepared when we rolled towards Sandy and he asked if we were driving any further. “I’m dropping you off at the Arco station,” I said without explanation, because the Arco station is six feet inside the Sandy city limits. The rest of the trip home was pleasant, windows rolled down all the way, and the next day was sunny and bright all over again. An excellent day to shop, see more of Nature’s wonders, and have the car upholstery burned.

International relations remain good, and if you have any more nice Canadians, roll them on downhill. We’re ready.