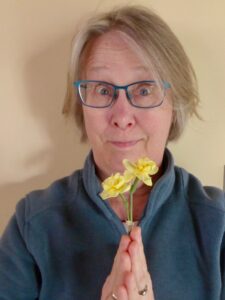 Dave and I just got our fourth coronavirus vaccine. It was fun. I’d get one every month if I could, and ice cream afterwards. It’d be a whole thing. At this point my only side effect is a conviction, late in the day, that I should maybe go to bed early, and not feel too bad about it.

I don’t think I’ve ever said No to a first date with a vaccine, but I’m not certain what-all I’ve been vaccinated against. Polio for sure, because my father thought one child with polio in the family was plenty. He was old-fashioned that way: they said this thing could prevent polio and he was all Sign us up and never once thought that the Deep State, which was not a thing then, or now, was trying to pull something over on him.

I know I got a tetanus shot every so often, and pneumonia, flu, shingles, coronavirus.

There are a lot more available but for a lot of them I just went ahead and got the disease. I didn’t have anything better to do, except fourth grade. Chicken pox was a snap. I never had a fever or felt sick although I did have some itchy pox, which the doctor figured was poison ivy. I was already renowned for my exuberant reaction to poison ivy. Then he cleared me for summer camp. Sorry, fellow Luther Leaguers.

Measles was not a snap. I had a horrendous fever and nightmares that I now recognize in most descriptions of near-death experiences, especially the ones involving a tunnel, and forget about the light at the end of it. Not for this kid. And I did go to church at age eight, so that light should’ve been there, if there’s anything to it.

I knocked Mumps off the list as an infant. I was sort of a round baby anyway so I’m not sure how they could tell. Maybe I finally quit squeaking for a gol-durned minute.

Half the people upset about vaccines would mainline an untested vaccine against hair loss. But a lot of folks have lots of reasons to hesitate getting vaccines or reject them outright. All of them are stupid. Out of charity, let’s pretend the antecedent in that sentence is “reasons” and not “folks.”

For instance, many people think our salvation via solid science came a little too fast for comfort. I get that. I too would much prefer to slog on for another year in terror before getting my vaccine, just for the pure hell-and-damnation purity of the thing. I have a naïve tendency to believe people do not mean me harm, and I might as well start correcting that by distrusting the CDC scientists and signing on with Q-Anon. Maybe I should have let my body have a crack at that virus on its own.

But if the development was fast, it wasn’t really rushed. There had been some amazing discoveries about bacterial RNA and the possibilities for immunology were ready to roll years ago—this pandemic was utterly anticipated—and as soon as they had the map to this particular virus genome it was all zip bam boom. Two days. Maybe it would have been reassuring if they’d double checked everything using long division on lined paper with a sharp #2 pencil, and sent the results to the CDC by mule, but it was considered prudent at the time to quell this sucker before it spored off with new variants. Which might have worked if everyone had rolled up their sleeves, the way people used to do when a compelling mutual interest was involved, but these days people don’t like to be told how to roll. So now we’re stuck with this thing because too many people didn’t want to be stuck with the other thing.

And then people said it hadn’t been properly tested. I don’t know what they’re saying now that literally billions of people have been inoculated, and we’re neck deep in good data, but nobody likes to give up a good crotchet.

And then there’s Bill Gates. Can’t trust that dude. Who uses their wealth for world health when they could just as easily buy yachts with it? It’s not natural. Redundant yachtage, now that makes sense. So hang that guy.

Americans prefer to make up enemies rather than fight the ones we have. It’s easier to pretend we’re threatened by government workers and smarty-pants scientists and desperate Mexicans and mouthy Black people than it is to fight climate change. Seems like there couldn’t be a connection, but there is. Those who aren’t done wringing all the money out of fossil fuel extraction can manufacture as many irrelevant enemies as they need to manipulate the people. Zip bam boom. Half of us will fall for it every time.

So tell me. Is there a vaccine you don’t want to get? I’ll get it for you, and send you a nice bouquet of thoughts and prayers.