Lepidopterology For And By Dummies 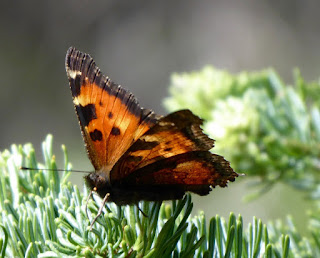 Don’t know where the punch bowl was, but butterflies fly like they’re drunk. You’d think they could only blunder on whatever they’re looking for, flower nectar or Personal Butterfly Nectar, but you’d be wrong. There they are, flapping away and staggering across the sky, until another one shows up, and suddenly it’s all highly precise aeronautic do-si-do and allemande-left, soon to be followed by butt-to-butt and shwing your partner. Clearly they do have a plan and know how to carry it out.

And clearly I need to learn more about butterflies. Starting with our little orange friend. Question one: who is it?

Question two: did you know there are five bazillion orange butterflies in the field guide? And that there are worse things to do with your time than spend a half hour leafing through them? My orange friend is a Gray Comma. Commas are so-called because of an eensie beensie white mark on the back of their wings that looks like, um, a parenthesis. There are also Question Mark butterflies. Basically, you should ignore all the fancy colorful bits in the front and flip your butterfly over to look for punctuation.

You can also spot the comma-that-looks-like-a-parenthesis if they fold up and show the gray mottled backside of their wings. They have raggedy edges to their wings and when they fold up into the praying-hands position, they look like crap. Specifically, they look like leaf litter, presumably so as to be less noticeable to predators, although just between you and me, plenty of birds like to kick leaf litter around. 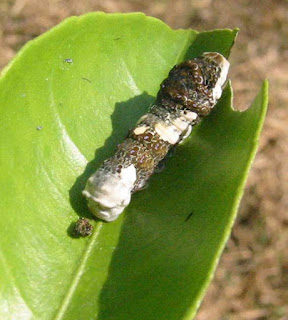 (Even then, they’re crappy at looking like crap compared to the Giant Swallowtail, which comes out of the egg looking like bird poop. That’s okay. Mom was pretty much done with them after she laid her eggs on a nice breakfast plant. She’s not going to fret about their social challenges. The strategy is: nobody eats bird poop. Even mystery bird poop that appears to be chewing up plants just as fast as it can. The bird poop caterpillars unzip their suits when they’re too tight and reemerge as larger bird poops because it worked out so well the first time. They’ll do this four more times until they’re too large to be plausibly poopy and then a whole new fancy version shows up, but I digress.)

Back to our little orange sots. Evidently they are lurching around looking for meaningless sex. Long-term commitment does not apply to butterflies. They find each other by sight, and seal the deal with pheromones, little molecules of flirtation. They also have photo receptor cells at their genitals, which have to be pretty close to Where The Sun Don’t Shine, but we’re not here to criticize. The rest of the show is the same old story: the male employs a pair of “clasping organs” and his “tubular structure” is extruded into the female’s “vagina,” or hoo-hoo. 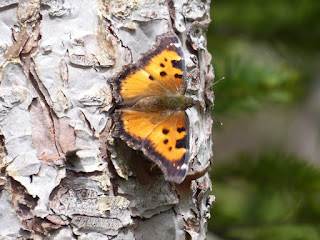 This may go on for several apparently agreeable hours. The male may present the female with a nuptial food gift in addition to his sperm packet, which no female really regards as a gift so much, and then eggs are laid, larvae emerge and eat everything in sight, and eventually, uh-oh! The caterpillars pupate in a chrysalis. Sure, it’s embarrassing, but it can happen to anybody.

What follows is the amazing metamorphosis that every school child learns and can illustrate readily with folded construction paper and little crappy rounded scissors. There are numerous videos of the metamorphosis of a caterpillar to a butterfly but they are not satisfying. You can’t see what’s going on. A big goober crusts over and hangs around and then a butterfly busts out. Like, what the hell.

It’s all been a big secret, until now! The chrysalis is actually open in the back where you can’t see it, and the butterfly was in there all along in a bag that looks like it’s securely fastened, but really has a secret zipper in the bottom. Distraction doesn’t figure in. The process takes a few days and they know perfectly well you’re not going to be looking the entire time. 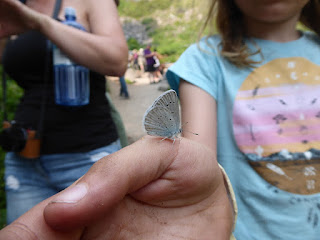 Now we’re back to having a butterfly and the crowd goes wild. People love butterflies. People sometimes find a butterfly has landed on their very person, and they’re usually pretty honored by it, even though the insect is basically attracted to their salt, and would be equally interested in landing on poop or a corpse. They might even have just done it before they landed on you. They’re just big tubular structures, that way.