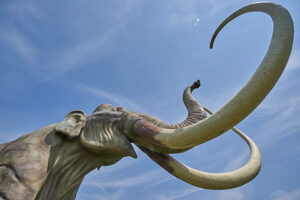 The people who are getting good at genome tinkering are setting their sights high. Over thirteen feet high, to be precise, if they succeed in producing a woolly mammoth in the next six years. There are ethical and practical considerations to the venture, of course, but many in the field have reached the consensus that such an achievement would be “neat-o.” I agree. I’m all for it.

In order to achieve a mammoth, and get it paid for, though, they have to come up with a different rationale. The goal is to produce a “cold-resistant elephant,” some say, after having suggested and rejected the version with smooth, fine-pored skin, or the one with uncarvable tofu tusks. A cold-resistant elephant can be manufactured and sent off to Siberia, which is thought to be a more favorable fate for a mammoth than it is for a human dissident. In fact, the place they have in mind is already called Pleistocene Park, and nobody can imagine anything going wrong in a place with a name like that.

The ultimate rationale is that an introduced mammoth population might be just the thing to re-engineer the tundra ecosystem that has long since given way to moss and methane. The mammoths would break up the moss, knock down the trees, and reinvigorate the original grasslands using advanced stomping technology and mammoth poop. They’ve already jammed a bunch of bison into the Park for the same purpose but it is thought that mammoths—once spliced, created, implanted, and delivered in sufficient numbers—might do it more efficiently. Also, they’re neat-o.

They’ve got the genome pieces pretty well knocked together already from the long fur to the domed skull, and all that remains is to locate a suitable elephant surrogate mother, fend off the ethicists who object that the elephant is not capable of informed consent, and of course figure out how to do an in-vitro fertilization on a pachyderm, which requires sound ladder skills. But in order to be effective at reconfiguring the ecosystem they’re going to need a lot of mammoths, and that’s going to take a lot of surrogates. So they’re looking into other options.

What with one thing and a mother, it just seemed more practical to develop a prototype stand-alone ex-vivo artificial woolly mammoth uterus capable of nurturing a two-hundred-pound woolly baby for two years—a roomy womb indeed—using plastic and stem cells from uterine tissue, and then make a whole bunch more of them.

Modern elephants, it has been pointed out, have a very strong mother-baby bond, and it is not known what a motherless mammoth might be capable of. We have no idea if ancient mommoths used to hum You Are My Sunshine to their developing fetuses, and so we have no idea if an artificial uterus might engender a sociopathic mammoth—not a trait you want in a six-ton beast with a pointy face.

So there’s a lot to consider in this enterprise. Unlike the mammoth remains being mined for genetic information, the subject is not cut and dried. “You want to fertilize the tundra with poop,” groused one biologist unable to land a grant, “bring back the passenger pigeon.” Biologists everywhere nod in agreement for the cameras. But off the record, they’ll tell you ethicists are annoying. And mammoths are neat-o.