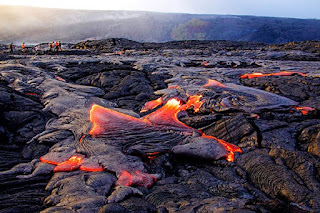 I’ve said it before. People take things so dang personally. One little thing goes wrong and it’s all about them. Everyone bitches about the crappy weather on the weekend, but crappy for whom? There could be legions of salamanders who couldn’t be tickleder about it, but nobody thinks about them. They think only of themselves.

I guess it’s just our nature. We’ve got a hell of a thing going on in Hawaii right now that anybody should be honored to witness but it’s being described as leaving a “path of destruction.” Yes, it’s possible you and your car and your house and your slower offspring and everything you’ve ever loved and cherished could be melted on the spot, but let’s get some perspective here. This is clearly an act of creation, not destruction. You’ve got brand new real estate welling right up out of the ground before your very eyes. 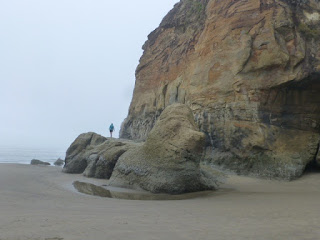 We had much the same sort of event right here in Oregon not that many million years ago. Same kind of basalt flow. It flowed mostly westward at a decent clip until it hit the ocean and got chilly. Generally speaking, the basalt was said to flow at a rate a human being could outrun, although he would have to outrun it for a solid week. That was usually the sticking point, or would have been, had people been invented yet, but they hadn’t, which cut down on the whining.

There are various ways in which molten rock meets blue sky. For instance, you could put a wedge of sea floor underneath the shoreline and keep shoving it down until it got so deep the pressure remelted it, causing volcanoes such as our own Cascade Mountains to pimple up about a hundred miles inland. But in the case of our huge shield-volcano basalt flows and the Hawaiian ones, it’s because there’s a hotspot underneath. Some spot in the deeper earth layers is perennially hot and churns out lava. Could be in the mantle, could be one floor higher; they’re not sure. It’s the spot where the fire goddess Pele sits and fans herself and complains that everybody’s mumbling and the music is shitty now, and many people have left gifts for her as a bid for leniency, bouquets and leis and virgin teddy bears, but it doesn’t work. (She wants chocolate.)

Pele doesn’t move around, but the lithosphere above her does, so it twirls out a nice apostrophe of islands over time. In the case of the Hawaiian chain, it’s the southeasternmost island that is newest and they are progressively older to the northwest. There’s a volcano newer than Hawaii but it hasn’t broken the water surface yet, and nobody counts it until they can drop a parking lot on it. That’s another narrow-perspective thing people do. 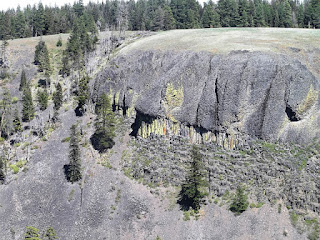 Our own basalt flows have quite sturdied up the landscape for us. Apparently we are sitting on enough basalt that it could have covered the continental U.S. evenly up to twelve meters (“meter” is French for “yard”). We and our parking lots stand now as the westernmost legacy outpost of the old hotspot that is currently under Yellowstone. Ain’t nothin’ but heat coming up around Yellowstone and no end of wonders to behold, but even here you’ll find people all cranky about not being allowed to annoy bison with their snowmobiles. If there were any justice in the world, these are the people who would get their asses geysered.

I think there are a lot of things everyone should be required to learn. Here’s one that rarely makes the list: whichever patch of the planet you live on, you should know its story. You should know what got rammed or rumpled to give you your view; you should know why there are seashells in the middle of your prairie. You should appreciate how very tiny and ephemeral you are, and be humble, and enjoy the show, and try not to trash the place on your way out.