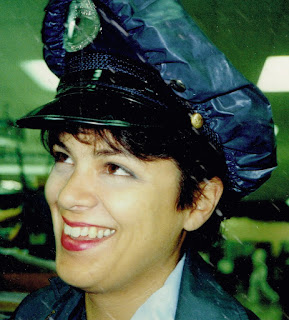 This time of year, late June, they start before five in the morning. The dawn chorus is full on, but the bird that wakes me up is the crow that thunks down on the gutter over my head. He’s a brand new guy. He goes off bleating every few seconds until his mom or dad comes by to jam something down his maw, and then makes with a sort of strangled honky noise and pauses to swallow and then goes right back to bleating again. Something similar is happening in every tree. It’s nesting season, and everywhere you hear the piping and squeaking and beebling of new life.

It’s a strange time to die, but that’s what my friend Tamara did. It shouldn’t have come as a surprise, I suppose. She got fake cancer years ago. Went in to the doctor for a routine checkup and came out with an unsolicited cancer diagnosis, and not one of your better ones. She got a port installed for chemo that maybe interfered with her tennis backhand but other than that she had no symptoms. For years. She referred to her cancer, when she bothered to do so at all, in the same way you’d talk about your neighbor who keeps parking crooked in your shared driveway. Slightly raised eyebrow and a shrug.

Jesus! Smart as hell, that one. Tamara was one of the smartest, funniest people I know, and my standards are high. Her face comes easily to mind when I close my eyes. Floats right up there like a big “yes” on a Magic Eight-Ball. So this is as good a time as any to mention how beautiful Tamara was. It’s one of the first things you think of, because she had the kind of beauty anyone could agree on. If it was a blessing at all, it was probably a mixed one. Sometimes people blame a person for her own beauty, and how it makes them feel. But she had it nonetheless, and the part I can’t forget is her smile. Often as not she highlighted it with impossible, arrest-me red lipstick, and she totally pulled it off, by the way. But the remarkable thing about her smile is that I do not know what her face looked like without it. I do not. She had that lightness.

Hard to say why. Hers was, by all accounts, the kind of upbringing you have to recover from, but that’s what she did. The smart and the funny helped. Somehow she sifted through the fundamentalism and falsehoods and burdens and weights on the soul, and abandoned them one by one, and pulled herself steadily toward health. She wasted no time. Oh, the occasional whiskey-for-breakfast kind of wasting time, sure, or the read-all-day-in-bed kind, you bet. But she didn’t squander a minute of life on regret, or shame, or self-pity, or guilt, or worry, or taking offense–none of those things that keep most of us mired in self-doubt and distraction. She blamed nobody, including herself. No ma’am: she was moving ever onward.

So it’s a shock, this sudden lack of onwardness.

What else is there to report? The gardens? Fashion? Political engagement? Volunteerism? Sure, all that. But really: the food. Oh my god how that woman loved food. Most people claim to, but most women don’t tuck into it headfirst by the platterful without feeling the need to apologize. Which, she knew instinctively, was a waste of time. And since she loved eating so much, she learned to cook like St. Peter’s sous-chef. She loved to eat, and loved to laugh, and snorted right out loud when she laughed, and really, all that needs to be said about Tamara is that she was admitted to the emergency room on two separate occasions for snorting pasta while eating and laughing. Top that, timid ones.

It was only six months ago that her fake cancer suddenly stood up and stomped on her gut to get her attention, and then she couldn’t eat real food anymore. Another person might have despaired but she just adjusted her lifetime aspirations to being able to get one nice piece of sushi down. She started to dwindle. Only the packaging, not the prize inside. She lost a bunch of weight, admitted to pain if you asked her directly, but otherwise just stayed funny and smart, per usual. Maybe it’s easier if you don’t have a habit of blame, or even a God to blame things on. You move onward, to the end we all share. You don’t waste time. 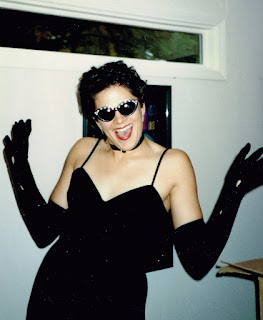 I guess for people like her the most that is likely to be claimed for her soul is that it’s now free to mingle in the spiritual plane. I won’t say it. I’m not comforted. I want my Tamara undiluted.

So that’s that–Tamara is gone. But I know exactly what she left behind. I can sense it whenever a chance joy settles over me, and I can see it, too, if I shut my eyes. Something sweet and bright, in arrest-me red, stretching wide across the sky.