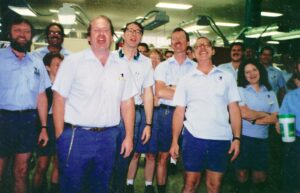 So. Back to lallygagging. I believe we have dispensed with the idea that mail carriers are lallygaggers just because they show up later than people think they should. How could such a preposterous slander have come about? Whence this calumny, sir?

Maybe it’s because so many carriers look like shit. They truly do. We are provided a decent allowance every year with which we can refresh our outfits, and by rights you’d think we’d have a professional-looking crew.

Something about the job attracts people who disdain authority and defy societal convention and if one of those conventions is personal hygiene, so be it. Dishevelment has been elevated to an art form. These are people who can wrinkle Permanent Press. Our greatest practitioner of the slovenly arts, who never spent his uniform allowance and looked like he was wearing a tailored snot-rag, once bid a route out of the station and got chocolate icing on his shirt from the good-bye cake, and when he came back two years later, it was still there. Hey, Pigpen had to grow up to be somebody.

So when you see our postal representative shlumping down the street at a dead trudge, wearing an untucked shirt turned sickly green in the belly region from the ink on the magazines, pausing with one foot raised over your cherished shrub to finger a handful of letters, you might be forgiven if you thought: Not America’s Finest. 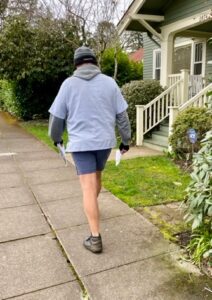 Here in Portland our standard-issue letter carrier wears a non-postal wool cap, a non-postal hoodie, bright sneakers, and leggings under the shorts. They’re comfortable. And they don’t care what you think. But they do care about the mail.

Some of them really are lallygaggers. So there’s that.

But even the sludgiest letter carrier at least presides over a certain amount of new mail every day and makes it go away, hopefully into some of the correct receptacles.

I never went to one of Dave’s job sites but I know he worked hard. He’d come back home in his coveralls looking like a powdered donut or the world’s tallest dust bunny. Or he’d still be on fire. Just the fact that he could pick me up like I was a potato chip—and I’m solid—indicated he was operating actual muscles somewhere.

Most of us simply do not know what other people do all day. We guess, and not charitably. We get the part where we intersect with them, say, when our mail comes sailing through the slot, but after that our imagination falters. When we spend an hour on hold on a customer support line, we’re certain Ernestine is on the other end filing her nails, but she’s probably not. Because if you finally reach her and say “I’m not blaming you, honey,” she will burst into tears and tell you three-quarters of her life story with emphasis on the last week. She is a deeply misunderstood woman.

A large number of people these days go to work in the coffee shop with the same laptop they play Wordle on. How can you tell if a Systems Analyst is working?  How would we know?

I try not to cast nasturtiums. I don’t know what they do, but I do know they have to do it all the time. They are never out of touch. Their relationship to their employer is umbilical. They never get to punch off the clock. That has to suck.

And I can’t talk. Lallygagging is built right into the writing business. Witnesses, if I allowed any, would see me staring out the window as much as at the computer screen and I might play a Sudoko once an hour just to straighten out my neurons. It’s like picking up the corners of my brain and whipping it in the air until I can fold it properly. It probably doesn’t look good. What in the world is she doing to earn her money, my witnesses would grumble.