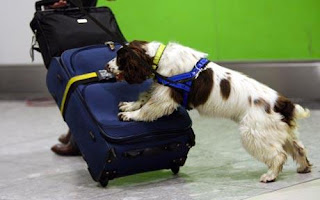 Drug enforcement agents in the United States are peeved at Guyana for allowing cocaine shipments onto flights originating in their country. Officials at JFK airport in New York were incensed to find a suitcase from Guyana packed with fifty pounds of pure cocaine, but what did they expect? There’s a surcharge for over fifty pounds. 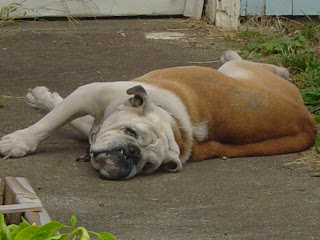 The Guyana airport is currently patrolled by a trio of drug-sniffing dogs, two of them elderly and one with a bit more spark, but all three have proven nearly useless in detecting drugs. The trainers in charge of the dogs have complained that their task is hampered by the government’s refusal to share (supply, rather) any cocaine for training purposes. This means each dog must be trained to learn the smells of everything that is not cocaine, and then to alert at any unknown smell. This is a long process and the result is a fully trained canine corps so decrepit they are rarely moved to lift their muzzles off the linoleum. A test dog (“Zippo”) who was allowed to sniff cocaine in training proved too bouncy to be reliable, although he seemed to be getting an awful lot done.

There are many uses for dogs in the sniffing world. They run the gamut from the famous bloodhound cadaver-dogs that go on search missions, to your friendly neighborhood menstruation-pointers, but there is also quite a bit of promise in the field of dogs that sniff people who aren’t dead yet. With training, some dogs have been shown to be preternaturally effective in picking out people with cancer, even the ones who do not have moles shaped like Milk Bones. Rates top 99% in the detection of some forms of cancer, such as lung. The dogs are even able to detect breast cancer 88% of the time, with a low number of false positives, a record that is far better than that of mammograms. Given the discomfort many women report when they are having their breasts slammed into wafers by a mammogram machine, researchers are encouraged. Dr. Preston Pulpit of the Institute of Sadistic Medicine has proposed that a compromise protocol might be reached by pinning women in place with the mammogram machine and then bringing in the sniffer dogs. The radiology crew, widely reported as overworked and cranky, is enthusiastic. 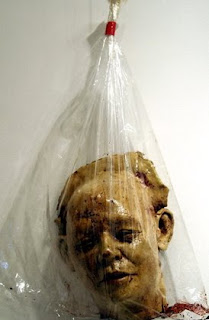 But back to airports. Even a work crew of frail Guyanan dogs should probably have been able to detect the shipment of human heads that was, sadly, discovered instead by a remarkably loud employee of Southwest Airlines. There was nothing unusual about heads being shipped, airline officials tell us, although they were not satisfied with the package labeling. Some people have been startled by the notion that they may have shared airplane space with a crateful of heads, but this is not a concern of mine. I’m fine with anything that doesn’t use up too much of the armrest.

My problem is that the number of heads, originally reported as “a whole bunch,” was later revised to be “between forty and sixty.” What, were they rolling around? Was it that hard to get a good count? Come on, people. These ain’t grapes. Slap a post-it on every tenth head and let’s strive for a little accuracy. If we’re going to go to the trouble to check off the anatomical donor box on our driver’s licenses, you owe us a decent head count.