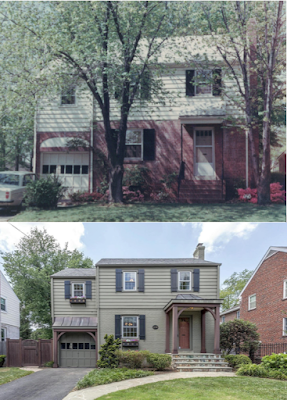 In 1976, Mom and Dad sold the house I grew up in. They’d originally bought it for about what you’d pay to put some carpet in it now, and sold it for $60,000. That astonished them, and they didn’t give much thought to the fact that it sold in the first half hour. According to Redfin, it’s now worth around a million. I was back in Arlington, Virginia fifteen years after I’d left and I stopped by. I put on my most disarming face and knocked. A couple came to the door, and I explained my heritage, and peered hopefully between them, because they were standing side by side, arms linked and shoulders pressed against the door frame. “I guess you can look at the back yard,” one of them said, reluctantly, and followed me back there to monitor.

Well that was disappointing, but that’s what comes of having your crummy old house be in a currently hot location and worth a lot of money: Republicans buy it. I assume. I won’t say anything else about Republicans this time, except that it strikes me that they are fearful people as a whole. 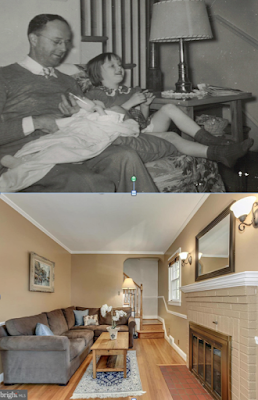 Then it occurred to me recently that if the place had ever been up for sale there might be a slide show of it online, and guess the hell what? There was! There were thirty photos of it looking every bit the way I remember it! Nobody ever added to it or “opened it up.” Which means it’s still a little house with itty bitty rooms jammed in and no sense of flow.

The front door still gives into the living room. In the photos, which were presumably designed to put the place in its best light, it is clear there is no room for today’s furniture. Everyone in our family was fun-sized, and consequently we had little sofas and chairs. If you put in one of those modern big-ass sofas and stuck your feet out, nobody could get by. I suspect the furniture depicted belonged to the seller, because if you were going to stage it professionally you might not want to stick an enormous TV on the diagonal in the corner to demonstrate how much room there isn’t. To get a similar effect, they could have put my current piano in the living room with the narrow end extending into the dining room, and set up bar stools and place settings around it.

This house is palatial, from the perspective of a modern urban tent dweller in a median strip. Or an immigrant or refugee. Or of any human alive in the front end of the twentieth century, or the million years preceding that. But utterly inadequate for a teenager in the ‘Sixties. Teenagers are not known for broad perspectives.

If my friends came over, the front door would open into that living room, where my tiny Mom and tiny Dad would be sitting in their tiny chairs, and still taking up most of the room. And they wouldn’t leave. In their defense, there was nowhere else to sit. And so we mostly crowded around cross-legged on the floor and minded our language. It was not an ideal situation, socially.

Because we did not have the rec room that thoughtful, loving parents would provide. Ohh! The rec room! A whole basement all shined up with fresh linoleum and a bar and pretend wood paneling and a big ol’ stereo and ash trays and sprawlable furniture! Cue the celestial choirs! We had nuclear bombs and Civil Rights marches and assassinations and war and all of it would have gone down so much easier if only we had had a rec room. Amazing things happened in rec rooms, where parents never materialized. The moon landing. Wholesome socializing. Loud music. Drinking. Drugs. The televised draft lottery. Making out. Actual sex. Oh, my parents were cruel, cruel. 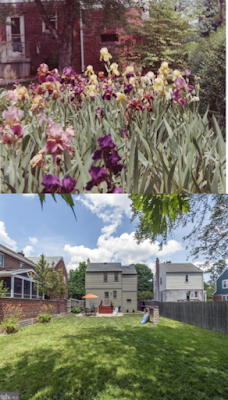 A million bucks. They’re calling it two full baths now. None on the main floor, still, but upstairs there’s a tiny one. Tall people sat on the toilet sideways. The sink is now a vanity but I don’t know how they get the door open. And they have in fact redone the toilet in the basement. They have opened that up, at least, into Dad’s old darkroom, and there’s a shower and everything. It used to be a little hole in the corner with a funky toilet and cracked sink, cinderblock walls with guard spiders and the occasional bat, and one photography magazine on the floor. Dad didn’t subscribe to any photo magazines, so this was an anomaly. If you picked it up, it sprang open to a page with artful black-and-white nudes. I think he thought he was the only one who used that toilet, and Mom certainly didn’t, but unfortunately for him, he taught us to like spiders, the naughty boy.

When I lived there, there was a massive bed of bearded irises, my Dad’s favorite, and a compost pile and another flowerbed and vegetables and five large maple trees. Now there is a daylily, because they’re hard to kill, and a lawn. Dollars to donuts the people who live there now pay someone to mow it. Yeah, we know who they voted for.