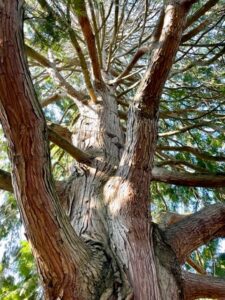 We’ve got a nice Western Redcedar next door, and Anna takes great care of it. She has a nearly untoward fondness for trees and I’m sure they think the world of her too. I’d have to do some basic math to figure out how tall it is and I left my math in my other pants, but it’s respectable. It was big when we bought our place and that was 45 years ago. We worry about it now because so many of our conifers have suffered from drought and some were killed outright by three consecutive days of stupid heat last year. According to Anna, the word on the street is our native Western Redcedars are in rapid decline.

So when our friend Margie offered to show us the biggest such cedar anywhere, we jumped at the chance. It had the air of a pilgrimage. Maybe if we admired it hard enough, it would put in a good word for its junior cousin next door. The big tree is located in a major bogland at the ocean’s edge, and I love bogs. There’s a half-mile trail to it. 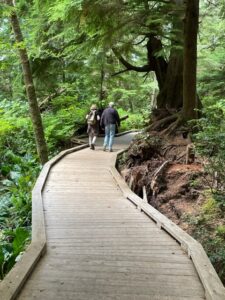 The trail is remarkable. It is a boardwalk constructed with great care and it keeps tree and bog admirers out of the muck the whole way. I usually look askance at such things. It feels as though if you make it too easy for people to go look at wonderful things, people will go look at wonderful things, and I’d rather have the things to myself. Screw those wheelchair folks, say I, though not loud enough to be caught saying it. There’s nothing I like better than walking somewhere beautiful, and the more rooty and rocky and exposed and steep and far away it is, the more likely it is we’ll have the prize more or less to ourselves. And we won’t have to listen to some bozo loudly telling his kids something about nature that is totally untrue.

In other words, I’m a butt. But the thing about wilderness is the more people who want to be in it, the less of it you have.

This particular boardwalk was itself a thing of beauty, though. The planks at curves were meticulously cut into fans. All around it rose skunk cabbage leaves that would not be out of place on a queen-size bed. Steller’s jays, crows, and wrens made periodic announcements and woodpeckers were in charge of maintenance. And then we came to the tree. This thing has been assembling itself for a very long time. 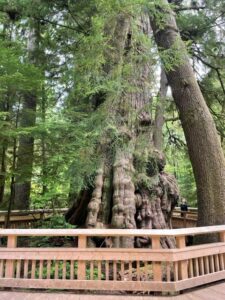 “So, is this the oldest cedar tree ever?” It looked possible.

“Dang it,” Margie complained, “there should be a plaque. Where’s the plaque?”

No plaque. Just a beautiful boardwalk encircling the tree at a respectful distance, and a bench or two. So how old would the oldest cedar tree be?

According to one source, this Rockaway Cedar is between 500-900 years old. That’s cutting yourself a lot of leeway, I think, but nobody is in a hurry to do any ring-counting. However, it’s not the biggest in the world. It’s not even the biggest in Oregon.

There are several in contention. There’s the Quinault giant. The Kalaloch Big Cedar. It’s hard even to estimate size. At that age, the trees are lumpy and weird. It’s like sectioning a mutant broccoli. Do you count the tallest or the fattest? The Duncan Memorial Cedar is the biggest of all time! The Cheewhat on Vancouver Island is also the biggest of all time! It’s like asking a bunch of experts at the local tavern what the best baseball team is. No wonder our poor giant doesn’t get a plaque:

Age is tough to work out too. Depending on which page of the internet you land on, the Quinault Giant is a thousand years old or two thousand years old. The Cheewhat might be 2,500 years old. Also, it might not. People get fancy with this. According to one source, “the Kalaloch Big Cedar Tree has been standing in the same location since the Byzantine Empire ruled Constantinople.” No one knows where it was before that and the Macedonians aren’t saying.

The Duncan Cedar was named after a logger who discovered it and didn’t get around to bringing it down. It could be he was overcome by its majesty although that sort of reluctance to fell is not common in the logging world, where the recent drop in the harvest of old-growth timber is now attributed to the scarcity of old-growth timber to harvest. Still, Duncan left it be, and good on him.

What is known is the Pacific Northwest coast is great for ancient huge redcedar trees. They love water and we have water. At least we’ve always had water, even in living human memory, and plenty of damp people would stake their reputations on the idea that we still do, but things have changed. Unfortunately, legacy water doesn’t do much for living trees. Even incremental increases in temperature and moisture seem to put these ancient giants into a pout. Nothing more temperamental than a thousand-year-old tree, I always say. They’re cranky and set in their ways, and they need to smarten up or step aside for a nice neat privet hedge. We’ve got new ways now.

It’s tempting to look at all of these giants as botanical timelines of modern humanity. Let’s say for the sake of argument they all came in with Jesus. Maybe he rose again, but they just kept on rising. The sky appeared to be the limit. But uh-oh! Things are taking a turn. There’s heat stress from climate change. There are stronger storms.

The Kalaloch Big Cedar keeled over in a wind in 2014. The Quinault Giant dropped dead in 2016. The trampling feet of its admirers in the root zone is also thought to be a factor in its demise.

That boardwalk is looking more beautiful all the time.