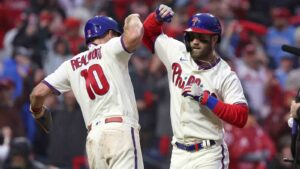 If the World Series taught me anything, it’s that it’s no longer enough to hit a homer and run the bases. Then you also have to run the gauntlet of congratulation. The friendly pound on the back doesn’t cut it anymore. In olden days, perhaps, they shook hands. Nineteenth-century sluggers in their knickers probably made a stockinged leg, popped a little bow and doffed their caps. Wasn’t that long ago you could count on a nice succession of high-fives, whack whack whack whack whack. You’d have the whole batting order to recover the feeling in your hand. Probably a couple innings at least.

Ah, simpler times. Now you need to ace a cognitive test. Man woman person camera TV. Your entire team has lined up outside the dugout and every one of them has his own signature of appreciation. Do they make them up on the spot? Or does every player develop his own and expect his teammates to remember it? The first baseman starts you off with a short hop and raised-elbow collision. Right field follows up with a fist-bump fireworks explosion. Shortstop favors the right arm arched over the back in a mutual quick thump. Third base goes retro with a sly snail handshake. Catcher executes a double-hop with glancing high hip. By the time you have pinballed through the lineup and the batboy shows up, he’s left doing a Tik Tok dance by himself even though he practiced in front of the mirror all week.

This is not merely a celebration of athletic prowess and excellence. This is a celebration of young, bouncy brains, not merely capable of homering in the World Series but completely unaware of their inevitable future senescence. Bless their pimpled hearts.

I’d be in trouble. It’s a lot to remember when you don’t have the greatest remembery to begin with. I mean, Yes, these men are all under thirty, which is barely post-fetal, but I can’t even be counted on to come up with my friends’ names on short notice when I need to make introductions. I totally know who they are, but my brain is all “Access denied.”

Used to be you didn’t need to remember that much about a person. People were polite by default. You didn’t need to know how much damage you were causing them—if you wounded them emotionally, they didn’t let you know. You didn’t even need to keep track of their birthdays—you just needed to know which of your friends were going to be all bent out of shape if you didn’t remember their birthdays, which was a smaller number, and stick those on your calendar. Then you could either send a card or decide to cut them loose due to the high-maintenance thing. You didn’t have to keep track of their political views. There were no social media. You might have a notion they didn’t vote your way, but it didn’t solidify into a lard of horror. You could remain friends.

You could invite people over for dinner without knowing what might give them three-day diarrhea or stop their hearts. You could just plate up whatever you wanted to. Could be they hated certain foods, but they wouldn’t tell you. People didn’t object. Life was simple. Heck. People used to watch you track dog shit on your shoes into their houses and light up a ciggie, and say “Oh! Okay then.”

Now you have to go over your invite list and figure out: No wheat there. No dairy there. No peanuts for God’s sake. Meat? No. This is not difficult, mind you. There are a million ways to make food and most of them are fantastic. But still. You didn’t use to have to anticipate a trip to the ER before making dinner.

You used to get by with an educated guess about a person’s pronouns.

You used to either call people in real time or send them a postcard. You didn’t need to keep track of whether a certain individual answers texts, or prefers iMessage, or email, or voicemail, or WhatsApp, or something I haven’t heard of yet.

You, one hundred percent, did not need to know your teammates’ preferred choreography to avoid being clotheslined when you went for a low-five and met a high-forearm.

And maybe that’s okay. Sometimes in life you’re going to go for that low-five and you’ll wake up later, not sure where you are. But that’s baseball, and that’s life. You didn’t know where you were anyway.
.