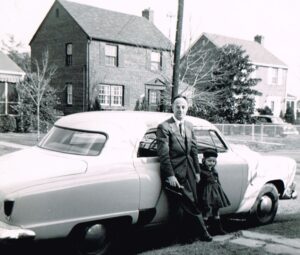 Dad didn’t believe in seat belts. He was wrong about that, but he had his reasons, and he was happy to tell them to you, whether you asked him or not. Dad was very smart and very right about very many things, but not all things. Fortunately, for The Man and The Legend, I didn’t realize that until I was at least thirteen. He was wrong a lot for a few years after that, but then he got back on track, for the most part.

But not about the seat belts. He thought they made the driver overconfident and careless. Besides, he had that karate side-arm thing going to keep any kid in the passenger seat from sailing into the windshield. Being whacked in the chest might have hurt if he had been at all athletic. 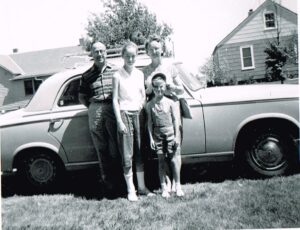 Seat belts didn’t really appear on the landscape until about 1964, by which time we already had our Peugeot 304, so it wasn’t a bother until we got the 1968 Volvo, and by then we had to have three-point belts, which were and are a pain in the ass. Seems to me the first ones you had to adjust to your own personal girth and snap in, and it wasn’t until later that you could (for instance) lean forward to get a map out of the glove compartment. Then, since you could, people spent a lot of time testing them by snapping their bodies forward to see if the belts caught. Just about when we figured they would, they changed them so they only caught if the car stopped suddenly, and there was then no way to personally test them that didn’t scare the crap out of the driver behind.

Anyway we didn’t have seat belts for my whole childhood. It was grand. Seems to me now the back bench seat of our Studebaker was a continent wide, and if Dad took the corners too fast, you could travel the whole country. I always took the Atlantic side and I’d pile into my sister on the Pacific with a hard left. There was a huge hump on the floor in the middle, and that was my seat if there were three in the back, because I was smallest and too young to vote. The hump was also helpful to keep you more or less in your quadrant when you knelt on the floor, facing the seat, to read comic books during the ride. Or just plop your head on the seat for a nap.

The other part of the Studebaker that you could really take advantage of in the days before seat belts was the ledge in the back. The Canada, if you will. It was huge. If you had toys you could kneel on the seat and play with them on the ledge. One evening, though, we were going somewhere, headed east. I know that because the sun was setting right in the middle of the back window. And I know this because I was kneeling on the seat, with my arms folded on the ledge, staring out the back window directly at the sun, and trying not to blink. I did it for probably a minute. It hurt a little, but the purple after-image of the sun was vibrating against the yellow sun itself. It was neat! My eyes kept flicking away but I directed them right back. If my Dad had been aware I’m sure he would have intervened.

I can still see it. Literally. To this very day I have a ribbon of sun-spheres burnt into my retinas that trail across my vision. Permanent streamers.

And that’s why you should wear a seat belt.