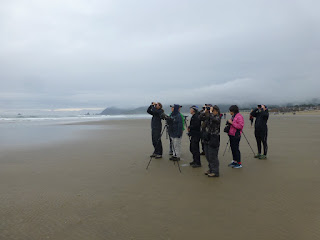 Last year’s Birdathon Day dawned auspiciously sunny and we hit the Willamette Valley hard, ready to kick some avian heinie, but by noon the mercury had shot through the top of the thermometer and the birds just parked it for the day. All we could see was the bottoms of their little hammocks, where they stretched out with their tiny feet up and hoped a bug would drop into their daiquiris. We had a respectable outing, but we definitely didn’t bag our limit.

We sure didn’t want a repeat of that, and we didn’t get one. Fifteen sunny days ago, someone in Meteorology Central penciled in a rainstorm for this year’s Birdathon Day, but when has anyone accurately predicted the weather fifteen days out? Why, fifteen days ago, thanks for asking! It was gray and drippy, and then grayer and drippier, and then biblically wet. This makes bird counting challenging. For one thing, a lot of the birds just hunker down somewhere in damp pajamas and dream about ordering in. In fact, home-delivered pizza capability is the main thing distinguishing us from the animals. It certainly isn’t having the sense to come in out of the rain. 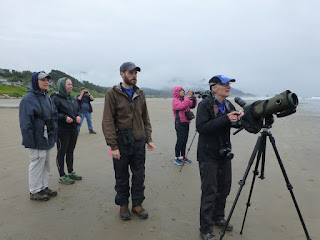 Second, if one did want to locate one of the dozen or so birds that pulled the short straw and had to venture out to find bugs for the family, one would have to try to do it looking through speckled eyeglasses and smeary binocular lenses and possibly through a steamed-up van window. It’s not ideal. In fact, under these conditions it is not always possible to distinguish a bird from a bird decal on a team member’s hat. This is why we were not able to count the New Zealand wrybill, even though I, personally, saw it.

We are tragically burdened by integrity. We have a rule that two people have to have seen or heard a bird before we can count it, and one of them has to be one of our team leaders, Max and Sarah (authors of Must-See Birds Of The Pacific Northwest). This specifically addresses problem team members like myself who are perfectly willing to contribute an eastern warbler that has never made it across the Rockies, even for a destination wedding. 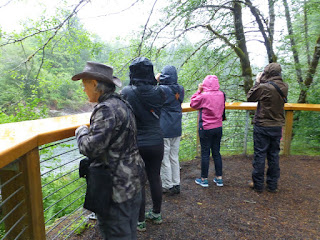 We did find the Dipper right away. Dippers are not much put off by rain. In fact dippers make a living by strapping on goggles and walking along the bottoms of streams for food so they don’t have to share it with sparrows. By that time it was dumping rain. I had on a pair of pants advertised as “highly repellent” (although I’m told they look nice), but nobody does repellent pants like a dipper. They come out of the water looking like Miss America.

The songbirds and such, not so much. We eked out a few bedragglers and sopsuckers and drenchtits. But we were headed for the ocean, where birds are famously indifferent to being soaked.  Even I am capable of recognizing a harlequin duck or a puffin or anything else with a fancy enough suit, but we needed numbers, dammit, and that means someone had to parse the shorebirds and seabirds and gulls. Shorebirds: that would include several theoretically different species of identical scampering fuzzballs. Seabirds are horizon dots that look like eyeball floaters. And the only things more annoying than gulls are the people who can identify them. Sure, they have their ideal field marks, on a seasoned adult. That’s not what you’re going to see. You’re going to see something as variable as a city pigeon and then you’re going to sigh in despair as your team leader looks into the scope for a nanosecond and snaps off: “Female Western-Glaucous hybrid, third-year, prom-night molt.” And when you get over yourself and ask for assistance, they patiently explain about the ringed bill on the ringed-bill (that they don’t even have until they’re old enough to get their license) or the spots on their wingtips (but they aren’t wearing shoes). 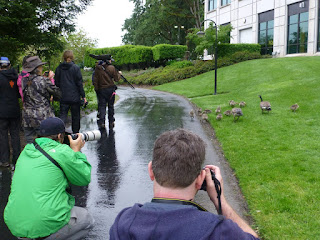 But we were ferociously successful. In trying conditions and damp underwear we wrestled that species list to the ground and headed home in the 99-species stinkhole, one mere mourning dove away from glory. And we would have taken that MODO, too, but instead we stopped off for a cup of acorn woodpeckers. Because we, my friends, gots class.


Then we picked up the mourning dove. Why not? Prime numbers are nice too.

Many of you wonderful people helped make our Birdathon fundraising team, The Murre The Merrier, a success. There’s still time to contribute–we’re real close to a heroically round number!–but I would like to salute the following friends now: