Your Goldfish Doesn’t Remember You 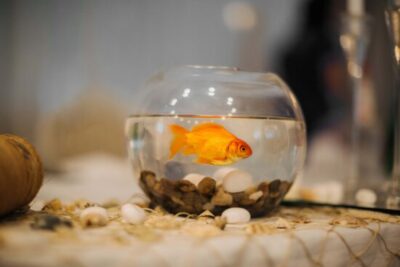 They say goldfish have only a three-second memory. This is based on the observation that it takes three seconds for a goldfish to make a complete circuit of its bowl, after which it forgets all about it and does it again.

This observation says more about the observer than the fish. Because it could be that the fish has outstanding recall, and every three seconds he comes around the bowl, looks out and says “Oh bother, you again,” and has to go back around again just to shake out the willies.

According to the goldfish’s jailer, the goldfish with the three-second memory is seeing the world afresh with each circuit. Similar conclusions include the notion that lobsters don’t notice when they’re dropped in boiling water, and my own contention that my mother liked doing laundry. (I based this on the fact that she did laundry.)

The fact is, people like to feel superior to the fish in the sea and the fowl in the air and all that creepeth upon the earth so they can have proper dominion over them, and so have seized upon the three-second goldfish as an inferior creature. Three seconds is considered a pitiful performance, especially as compared with the interval between when a human shuts off his phone and swears up and down he will not get back online, and the time he goes back online (5 minutes).

Of course, there is plenty of research behind the Dumbass Goldfish Thesis, “research” hereby defined as anything that can be found and shared prolifically on the social media whilst sitting on the potty.

For instance, a team at Stanford, positing that maybe the goldfish remembers things but just wants a little exercise, decided to plant something more critical in their bowls: they placed a tiny set of car keys in the little castles. Sure enough, the goldfish nosed the car keys and went right back around the bowl and found them all over again instead of just making a note where they were.

Russian investigators tried giving the goldfish a four-digit number to remember but once again it just came back around in three seconds gaping like a big dummy. Upon peer review, it was suggested that four-digit numbers are not important to the species but subsequent trials produced the same result with the fish’s mother’s maiden name, which it totally should have remembered.

A frenzy of goldfish-related internet activity ensued. A small but growing number of facebook users reported being able to train goldfish of ordinary intellect and were subsequently challenged by a vocal Macedonian guppy contingent. “Videos or it didn’t happen,” came the provocation, and soon youtube was swimming with genius fish able to nose up to a card with the correct name of owner’s first pet, oldest sibling, and last six of their social security number.

But there are darker rumblings yet on the internet. A certain percentage of goldfish sold in Petco stores, known to be secretly owned by Billionaire Jew George Soros, are spy goldfish engineered by the Deep State to report back on whether you leave the water running when you brush your teeth, which even now is resulting in hidden fees, public debasement, and a slide toward Communism.

Reputable mainstream sources denounce this as a baseless conspiracy theory, which is exactly what would be expected from the media tools of Big Conservation. The number of believers is growing, however, as is easily tested by the introduction of a meme instructing concerned goldfish owners to put black electrical tape over the front-facing portion of the bowl just in case.

The data on compliance are harvested from the Ninja Spy Canaries across the room.