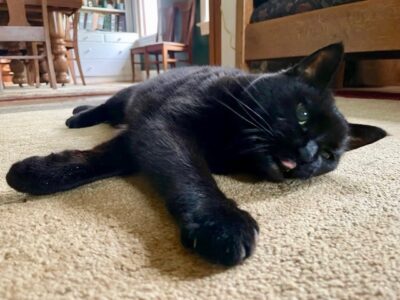 So, there are carpet sharks.

They’re not in your house. They’re on the ocean floor, and they look like a patch of carpet, only with teeth. Basically, they’re Death Legos. You don’t want to step on them. Carpet sharks probably scare a lot of people, but they don’t scare me. Not even the big ones, and a lot of them are only throw-rug sharks.

Sharks in general scare people. Even people who text while driving. But you have to wonder just how bad death by shark would be, really. If you suddenly saw one of those great white Jaws numbers rearing up, you might not even have time to be afraid. It’s sort of like when you suddenly spin out on the freeway and some semi is barreling down on you and you think “Well, shit, I guess that’s” and that’s as far as you get. You don’t even get to finish your thought. You don’t have time to think “existential dread.” Too many syllables.

But suppose you do get attacked by a shark and swallowed whole. Would it suddenly get dark and you’d be somewhere with your nose pressed into a pocket of shark gas until you run out of air? That would be bad. Or would it be a slower digestive-juices situation? Also bad. And what if you get snapped in two and your lower portions have disappeared without an opinion but your upper portions are fully aware of the predicament, at least for a little while? Very bad.

Most of us are uncomfortable with the entire death scenario. Even those of us who are just fine with it philosophically are not really interested in seeing the project to completion.

And some people don’t have the sense God gave a hammer, such as my friend Pat, who apparently was not only unafraid of steering a little rubber cork of a raft into the deep blue sea, but was also fine with climbing up the side of a whaling ship with large, genuine whalers aboard, and then chaining herself to a harpoon, and then having her fearless ass tossed into prison in Peru for piracy. Personally, I would have aborted the whole expedition several miles inland. That’s how I deal with my fears. Similarly, you’re not likely to find me in a little airplane with a parachute strapped to my back. It’s not that I’m particularly afraid of having my parachute fail—my heart would already have signed off two seconds after exiting the plane. I’m way more afraid of water. If I’d been on Sully’s plane when he elected to land it in the Hudson, all the people they walked off the wing would’ve had to step over my cold dead carcass.

And that’s even though drowning is supposed to be a pretty decent way to go, after that first minute when you’re still holding your breath. Anyway, I’m not afraid of no carpet shark. I’m afraid of his location.

Carpet sharks have been around for two hundred million years. People might tend to think of them, therefore, as primitive, which is a pretty snotty perspective from a species that’s worked out its own obsolescence in about two hundred thousand years. Sharks are successful, is what they are. Why should they tinker?

Shoot. Maybe they don’t even get gas.