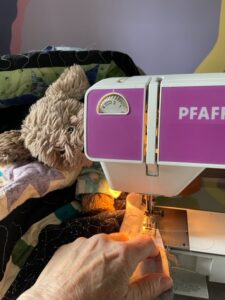 I’ll just warn you. The thing most likely to get me to strafe the neighborhood with F-bombs, at least since the last election, is my sewing machine.

I basically like sewing. My old machine was acting up a little and I got this one—my “new” one—about twenty years ago. “I just want a reliable machine,” I told the salesman, who was eyeing my old antique steel Adler with something like lust. “Don’t need any bells and whistles. Just a good straight stitch and a zig-zag with no hiccups. I don’t need it to embroider or any of that other crap.”

Did I sew clothes, or quilt?

Both, but mostly quilting.

Aha, the salesman said. I have just the thing. This is a new Pfaff and it has a walking foot. In fact, he went on, Pfaff invented the walking foot. How about that!

It was rather plain. Definitely did not have any visible bells or whistles, and I saw no reason to be coy about the fact that I had never heard of a walking foot. Is it like a zipper foot that puts itself away? That would be cool.

No, a walking foot is like a feed dog except on top so that both pieces of fabric you’re sewing move together instead of the top bit lagging behind. Very good for quilting tiny pieces. You want that kind of precision, he assured me.

Which is true. I do want that kind of precision. I don’t want my seam line to be a race between the top and bottom pieces of fabric, with one side winning. I bought the machine.

The walking foot is nice, but the machine has been a piece of shit ever since. Sometimes it’s just fine, but I’ve had days when I couldn’t sew more than eight inches without the whole thing seizing up. Suspecting that somewhere inside that box the thread has left the tracks and struck out on its own, I’ll carefully rethread it five times in a row and it will keep jamming and tearing holes in the fabric and then—then—without me having done anything different—suddenly run smooth again, on the instructions of its Satanic masters that know exactly how many times my machine can fuck with me before I throw it out the window.

Other times the fabric suddenly quits moving forward and in no time I have a thread ball the size of a pencil eraser that needs to be surgically removed. I keep an actual scalpel next to my seam ripper. And sometimes the fabric down is forced down into the guts of the machine so far and so fast that retrieval is perilous. It’s a Baby Jessica Down The Well situation and no guarantee it’ll come out alive.

I should get a new machine.

And the reason I haven’t gotten a new machine is you can’t get one anymore without the whole carillon of bells and whistles. Try buying a car now that doesn’t phone ahead and park itself in front of a pizza place without your permission, just because you thought about pizza. They don’t make one. Same thing with sewing machines. And the price jump between my machine and the next one up is about three thousand dollars.

There are some useful things. You can get a machine to always shoot out enough thread when you’re done with a seam that you don’t need to rethread the fucker every other time, which would really fucking come in handy. Or you can get a drop-in bobbin, or automatic threading. But you can also get one to embroider a monogram in any of five thousand fonts. To construct a sleeve by itself if you toss it a kibble. To stitch an old English countryside scene complete with cows and clouds on your quilt top. You can get seat warmers and a cup holder and you can start it up from across the room. The highest-end model pulls diamonds out of your ass and knits a tiara.

It’s a computer, in other words. Which means it might go on strike for absolutely no reason at absolutely any time. I just want one that sews. And maybe keeps track of where I put my tiny scissors.