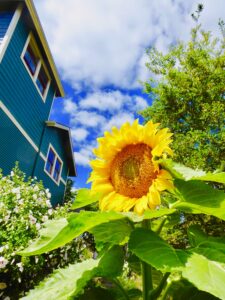 Dateline: Saturday, July 30, 2022. It is now 99 degrees outside. And since one should always strive to say nice things, I will say that this is as nice as it’s going to feel for the rest of the day, because it’s only noon.

Also? It’s been above 98 for the last six days and our weather is so tickled with itself that it’s penciling in the same for tomorrow.

Tardigrades are shrugging all sixteen shoulders but everyone else hates this crap. The crows are regretting their wardrobe choices. Even the tomatoes are pissy.

It’s enough to make a person resort to drastic measures, but, as I assured the neighbor, No, that wasn’t a gunshot. We’re defenseless Democrats. What happened is my thighs stuck to the piano bench so that when I stood up, the whole vinyl seat came with me. And then it slammed back down, with a thunderous crack that Beethoven took in stride but that probably scared the tweed trousers off Erik Satie.

Under normal conditions, I can get up and walk around without taking any of my furniture with me. Although it can get into triple digits here. Once a summer, maybe, or whenever my friend Linder comes to visit. But things have changed. I never expected I’d hear myself say “What’s the smoke index today?” or “At least it isn’t 116 degrees like last year!” or that I’d react to the terrible flooding in Kentucky by thinking “Sounds refreshing!”

But many people in Kentucky have been whooshed away by record floods and not the ones you might have picked out for culling. Rand Paul and Mitch McConnell, for example. They’re still fucking here. Here’s Paul, getting in a zinger on AOC: ”No the world will not end in 12 years but we must, absolutely must do something, over the next 500 million years.” Ha ha! As recently as two years ago, but not a moment earlier, McConnell allowed as how climate change was human-caused, but he has no plan to do anything about it. Except that he’s sure someone will come up with something clever sometime as long as we get don’t tax them. Kentucky is vulnerable. Drought, tornados, flooding, wildfire—the only consequence of climate change they’re dodging is coastal erosion, although with continued deglaciation combined with entrenched Republicanism they might not be out of those scorched woods forever. Kentucky coal still powers electricity plants, some homes, and a lot of legislators.

“I’m not a scientist,” McConnell said, when asked about man-made climate change, which was a good start, but amazingly he did not continue on to say “so I would defer to actual scientists on this issue.” Goodness no! It is a theme among Republicans to crow about not knowing anything about a subject and then going ahead with dumb-ass pronouncements on life-and-death issues anyway. And they still get elected. Ignorance sells as long as you’re proud of it. No one likes experts. They think they know so much.

These fakers don’t have any plans. Even their platform was just a photo of Big Ugly against a flag background and the words “What he said.” They have no plans for health care; no plans to strengthen our democracy; not even plans for infrastructure. All they do is make up problems we don’t have and swear they’ll fix them. Too much voter fraud. Too few assault rifles. Too many kids being taught history. Too many women thinking they deserve autonomy. Not enough God.

They are not serious. Mocking Greta Thunberg is not a plan.

Come on, Kentucky. Your representatives are telling you if it gets too hot you could always open a vein to let out some heat. You can do better.