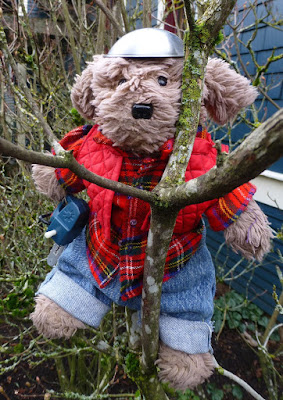 Well bless my heart, the city of Portland said “Sure you can take down your tree.” Just like that. The email with the permit in it beat us home by several hours. We were on foot. We’re analog, that way.

And now it begins. The whining of chainsaws! The screaming of hippies! Bring it on!

My niece is in the same fix. She has a tree that’s going to come down, and what it would like to do is come down on her house when it feels like it and not a second later, but she was hoping to persuade it otherwise. And the estimates she got for the deed were in the $4000 range. I figured felling a tree was a scary proposition but I didn’t think it was $4000 scary. That’s really scary.

The other thing my niece has besides the ominous tree, which is five thousand feet tall and wide even after you strip the brass knuckles and nunchucks off it, is a boyfriend with a serious jones for taking down a tree. Hercules has been trying to talk her into letting him take down their tree for months now, and she won’t let him. She likes him a whole lot and isn’t done with him yet, and she’d rather take the chance of losing a couple of licensed, insured, strapping 25-year-olds in sexy safety harnesses than lose him. Apparently you can put a price tag on love. It’s at least $4000.

But my tree, which we are calling the Big Easy, is a whole different matter. My tree pretends to be big but it’s all hat and no stuffing. “How about,” I suggested to my niece, “if we set Hercules loose on my tree, and he can get it out of his system?” The idea is that my tree might damage him a little, but not kill him outright. I get my tree down, and she gets to keep her boyfriend more or less unmaimed, and he can go on to other projects.

Done! The very next day Herc shows up at nine o’clock with the requisite splendid beard, a big pair of forearms, and a big pair of hand saws. Yes. Hand saws. It was the Stealth Felling. He sawed off the lowest branch and worked his way up. Just whoosha whoosha whoosha all day, so subtle that a flock of bushtits went in to land in their usual spots that evening and dropped to the ground like fuzzy hail. In five hours, almost without the neighbors noticing, our scarlet oak was down to a flagpole, with Herc furling gently at its top. The branches were cut up in two pickup-loads and carted away. Really, scraping the hippie out of the top of the tree was the trickiest part.

Herc thought it was fun. He enjoys the workout and he enjoys the puzzle of figuring out just how to take a tree down strategically without killing himself or, might I add, my precious shrublets. I enjoyed watching my tree come down for the price of a salami sandwich–he doesn’t even drink beer–and being able to return him to my niece in shiny original condition.

But the scheme was not flawless. Now he thinks this proves he can take down her tree, and that I’ll back him up on that. I think he probably can, but I’m not going to mention it.


Where did she find this dude, you ask? I’ll tell you. She found him in the woods. The rest of you looking for your true love on imsettling.com, or in all the gin-joints in all the towns in all the world, can think about that for a while.