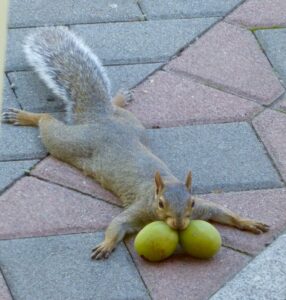 Looks about the same from the rear.

I don’t listen to the news anymore. I look at pictures of cute animals and food, and that is why I know there are a lot of people who are very fond of squirrels. Eastern gray squirrels. I am not fond of them. The best I can say is that they look like they’d make a really nice winter coat if you stitched enough of them together. One long coat would also reduce the population for a week or two before a new batch whooshed into the vacuum of their demise. We have a lot of squirrels. Really, more than are called for.

And they’re fat. They look like they’re filled with Bavarian cream. The only reason our local coyotes have not nipped them all out is they’re all still lying upside-down with their paws in the air groaning about having eaten too much creamy squirrel already and why do they do this to themselves every year. We need more coyotes, is what we need.

I was wondering just how many squirrels per square meter the landscape could hold and so I looked up “squirrel territory,” which was a mistake. I meant squirrel density. Instead I got their range. Guess what? They’re every the hell where. And their main activity is making more squirrels. And chewing on your electricity. Or your car.

They’re supposed to be in the eastern United States but they were deliberately introduced to Vancouver Island in 1966 for some damn reason and you’d think that would have been safe enough but apparently drowned zombie squirrels washed up on the mainland because now a flea can hop from squirrel to squirrel all the way to Mexico without getting its little back feet wet.

They’re total imperialists. They got to the United Kingdom and immediately approached the native red squirrels with gift baskets and blankets ridden with squirrelpox. Then they moved into the forests and acquired real estate and started redlining. The native squirrels might well have aspired to chewing on cars and electricity themselves some day but they never got the chance. Now wherever the natives show up, Eastern gray squirrels, in the name of standing their ground, chase them out for the crime of being red in a gray neighborhood.

They’ve gotten to be enough of a nuisance that the government began to promote them as a diet item. “Save a red, eat a gray,” the saying was, but Boiled Squirrel Pie was too bland even for the British and the Pakistanis couldn’t be arsed to try their hand at it.

They’re in Europe too and there’s been an effort made to keep them from spreading into Italy, but the Italians better start sharpening up their rodent pasta game because animal rights groups are busy blocking any eradication efforts. I basically like animal rights activists but some of them should be required to adopt an Everglades python.

Anyway doctors are now saying you shouldn’t eat squirrels because you might get Creutzfeldt-Jakob disease. Mad cow. It doesn’t kill you outright but we lose a lot of people when they dash out into traffic.

Oh. Turns out some of my squirrels might be Western Gray Squirrels. Which are native, and I’m not allowed to hate them. So I’ll just note for the record they eat acorns, pine nuts, berries, insects, cars, and electricity, and the Daisy Red Ryder Model 1938 BB gun is available at Dick’s Sporting Goods for $46.98.