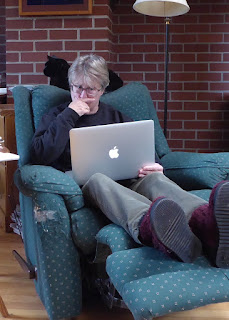 I got into a tiff with my word processing program the other day. I’ve got a new laptop and it came with a lot of features I don’t need, like its own opinions. I’m always willing to listen to another point of view for a while, but not if it’s going to be yap yap yap all day long.

This is a Mac program, and it is constantly weighing in with what is wrong with my writing. But I’m comfortable in my native language. Why, I’d even say I am above average in it. In fact, it is very uncommon for me to wonder how to phrase something, or spell something, or punctuate something. I know some folks who are even more reliable than I am, but not really that many, if you don’t mind my saying so.

Because I used to use Microsoft Word, I’m accustomed to having my prose light up here and there. It’s Microsoft’s way of saying “Really?” And I check it, and often as not I say Yes, really. I meant to say “recombobulated” or “flappety.” And every now and then it catches a typo, for real. There’s one word I’m always sticking an extra “m” in, the first time–it escapes me now, but there is one. So it’s useful. As long as it doesn’t go ahead and correct everything for me without checking in first, I’m okay with it.

The Mac program is willy-nilly retyping everything without permission. I know there’s an off switch on that and I plan to flip it, but I haven’t gotten around to it yet. And the other day, I typed the following sentence:


Stupid program kept capitalizing the “we.” I’d fix it, and it would just retort with another capital letter. I’d smack it down, and it would pop right back up. And this went on enough times that a little zephyr of doubt floated into my brain. What if I had it wrong? What if the way I want to write that sentence was never right in the first place?  Just a couple years ago, I discovered I was supposed to capitalize quotations in the middle of a sentence, and that was news to me. So it can happen.


Worse, these hesitations happen more frequently now. It’s an age thing. Words come up missing, and I find myself wondering about things I used to know for sure.  It’s like being the youngest kid in the family and you say Remember when Uncle Buddy cooked the cow pie in a crust and tried to serve it to Mom, and your older sister says It was pond scum on pizza dough, we don’t have an Uncle Buddy, and by the way you’re adopted.  It’s unsettling.


In this case I was certain my word program had gotten all flustered at my question mark. As far as it was concerned, the question mark meant we were now at the end of a sentence, and it was time to start a new one. With a capital letter. But it was being a real bitch about it. 23 out of every 24 hours I would be confident I was right, but this was that other hour–the dark hour in which I look up “oligarchy” for the thousandth time–and I thought, well, I’ll just ask my Facebook friends. Two or three people I trust will confirm I’m right, if I am. It’s not such a bad thing to be humble. It’s not shameful to admit doubt.


That said, here’s a really good cure for humility: go online for advice. Scores of friends weighed in. A thundering majority tried to correct something that wasn’t wrong. I was supposed to put “i” before “e” except after Labor Day; I was warned to avoid relative clauses whilst Mercury was in retrograde. There was a fire sale somewhere on commas and people were offering them to me in buckets. “Stick a comma here,” someone would say, and someone else would be equally enthusiastic about the comma but insist it go somewhere else. This went on for a while.


I love my friends. I do appreciate all the help. I’m keeping my original sentence as originally written, and–no offense?–I have a whole other idea where you can stick your comma.