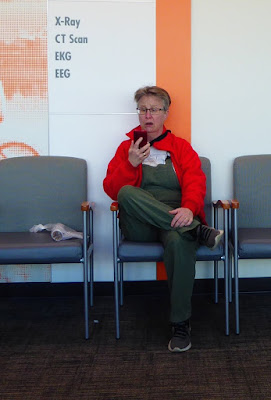 I’d just taken my friend Ruth to the doctor’s office for a routine appointment. She emerged apologetic. “I know you don’t have all day,” she said. “But the doctor wants me to get an X-ray. He’s hearing something in my chest he doesn’t like, and my left arm feels funny.”

Ruth is 93, in honkin’ good health. I was alarmed. While she was in X-ray, I thought about my other friend who’s sick. And my other other friend who’s even sicker. Suddenly I felt like I was in danger of being pulled underwater. I decided to call my friend to see how she was faring. My phone didn’t work.

That snapped it. I felt tears pushing up. Which is ridiculous. I’m upset because my phone is balky? It’s like I’d been jumping from stone to stone over a surging sea and lost it because my socks got wet. Get a grip, dude. Quit feeling sorry for yourself.


That’s when I saw the man looming over the horizon and headed my way. There’s no one else around. Oh no. He’s going to be a talker. I am not ready for a talker.

There’s this one old guy over in Dermatology who prowls the waiting room looking for veterans to talk to. He’s a Korean War vet and he wants to relive it all day long. He’ll talk to me for a little while but neither of us is into it, and after I thankhimforhisservice he’s off to find a fresh mark. I went to the dermatologist three widely-spaced times and he was there every one of them. I don’t know if you count as homeless if you live in Dermatology.

This other man–I’ll call him “Clyde,” because that’s what the nurse called him–has now wheeled himself over and is pointing at his knee, which is just visible under his belly. He is enormous. Planetary. He explains that he can’t walk because his knee is a mess. He gestures at the knee in question with his coffee-cup hand and sloshes coffee onto his sweatsuit.

“They won’t give me a new knee until I lose all this weight,” he explains cheerfully, “but I can’t lose weight if I can’t even walk, can I?” He’s grinning.

Ruth is back now and we nod in sympathy. 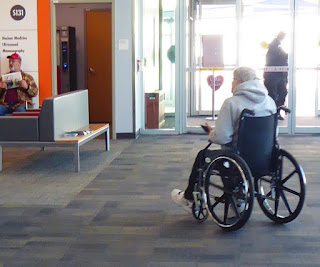 “And even if they do replace that knee, this one is about to go too,” he goes on, launching coffee at the other knee. “It’s had all that work to do to make up for the other one. Plus it hasn’t been right since I got that massive open sore on my thigh. Went to sepsis, that did.”

Clyde is clearly in a pickle, but I’m still not sure I want to hear about it, and I glance away. You’re never sure how long this is going to go on. Ruth is much nicer. She wants to know if he’s in here for the knee.

“Oh no. I’m going to have them check on this.” He holds up a fatly bandaged finger. “Took the tip off with a table saw,” he said. We were horrified. He shrugged. “I don’t even feel it much.  I have diabetes.” He gestured at his purple toes and a bit more coffee set sail.

“So I see it got some of your middle finger too.”

“Naw. That one was years ago.”

Oh. So were they able to reattach the finger this time?

“Yeah. But that’s the thing. They don’t know if it will stay on. And I’d like to know, because if it isn’t going to take, I’d just as soon they leave it off. You know? Like when a woman is raped, she ought to be able to have an abortion, if she wants one. It’s a matter of choice.”

I’m perking up. “So you’d like the freedom to choose whether or not to keep your fingertip?”

“Sure. It’s not a big deal. I’ve been fine without these–“

He waggled the fingers of his other hand, three of which were shorter than the original set.

“Naw. Got ’em caught in a hoist chain at work. I heard them coming off, and I thought: oh, brother, not again. I knew just what it was.”

“Maybe you should stay away from heavy machinery,” Ruth said.

At least until you’ve mastered the coffee cup, I thought.

Suddenly I realized I’d cheered right up. After all, this fellow was jolly enough. Sometimes that’s what  it takes. Sometimes it takes hearing about someone else’s troubles so that you can appreciate your own good fortune. Sometimes you need to get that different perspective, consider the wider world. This is what the mature person is able to do.

Naturally, that’s not what I did. I started visualizing what would happen if our new friend sticks around any longer. Things are going to start flying off him like Jiffy Pop. Boop! Boop! He’ll go off like a grenade. Things are going to cave in, bubble up, plink off. There’ll be Clyde shrapnel everywhere! It’ll be awesome.

Remember, it’s Ruth who’s the nice one, not me.