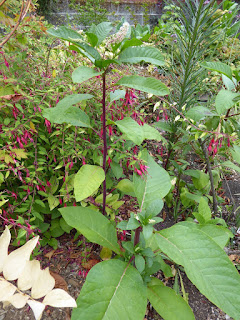 Back in the late ‘Sixties a new song came on the radio waves, and it really stood out in a year whose number one hit was “Sugar, ah honey honey, you are my candy GIRL, and you got me wanting you.” It was a cool song. It was raw. It was Southern. It was Poke Salad Annie.

Poke Salad Annie was a piece of work, she was. Gators got her granny. Everybody said it was a shame ’cause her mama was a-workin’ on a chain gang. She didn’t have a lot going for her but she was mean enough to make the gators look tame, and also she ate poke salad.  It’s a plant. She’d go down and pick her a mess of it. “Mess” is a unit of poke salad.

Because of that song, poke salad was mythic to me as I grew up in the heat and humidity of northern Virginia and imagined somewhere even hotter and cruddier, with gators. Tony Joe White sang the song and he growled and chomped his way through it, and when everyone else was singing Build Me Up Buttercup, he was a tonic.

So a while back when I saw a new plant in my yard that I definitely did not plant, and asked my niece the Plant Professor what it was, and she said it was pokeweed, I didn’t believe it. Naww, I drawled appropriately. We don’t have no pokeweed ’round these parts.

Okay, but I kinda wanted to see how it turned out. Weeds grow where they aren’t wanted, so maybe this one would give up if I acted like I wanted it. Note: plants do not respond to reverse psychology. It was cool-looking though. Bright green, pretty purple berries, and a certain enthusiasm. I figured I’d wait it out and nip it the next year.

Lawsa mercy. Next year it had gotten its feet under it. It was massive. It would give an unemployed lumberjack a woodie. (That’s what lumberjacks get.)

Pokeweed, as it happens, is spectacularly poisonous. You can only eat the stems and leaves and you need to bile it up and serve it with fatback, which, being concentrated pig deliciousness, is worth dying for. If you’re not Poke Salad Annie, you’re not mean enough to try it. The roots will kill you retroactively and a single berry will tidily drop a kid in a couple hours. The bigger it is, the harder it’ll kill you. 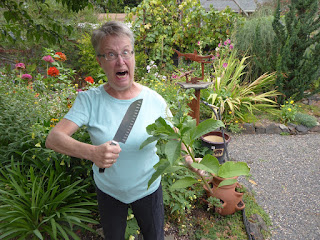 In the years since I saw that first plant, pokeweed has shown up everywhere in town, and there are some hundred or so of the little contenders poking up in my garden. Which is a problem, because a lot of kids roam through this yard, and some of them we really like.

So now, belatedly, I’m pulling them out as fast as I spot them. No mercy. I’m gonna pick me a mess of ’em. Wretched, spiteful, straight-razor-totin’ woman.