A Junco By Any Otter Name 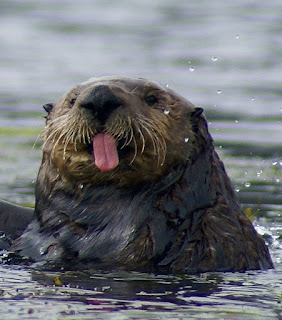 Since I was just complaining about taxonomists throwing all my varied juncos into the same bucket but separating identical chickadees, I thought I’d revisit what constitutes a distinct species. Seems to me there was something about a group of organisms being a species if individuals in the group are able to interbreed.

Which of course made me think of sea otters, because sea otters like to breed with anything. They don’t really care. If it has a hole, they’re going to poke it. If your cocker spaniel is off leash on the beach and you hear it go bark bark blub blub, you should run hurry and get ready to whack the otter. Because they’ll just keep hammering away at your dog, and holding its head underwater until it’s dead, and then they’ll keep going, because it takes a while to notice a cocker spaniel is dead in cold water, plus they don’t care.

So are otters and cocker spaniels the same species? Most experts agree they are not. The breeding may have been successful from a recreational standpoint, but a total bust from a viable-offspring standpoint. One successful pairing of a sea otter with a basset hound was ruled as an outlier when the resulting pups failed to thrive. The long ears of the mother were able to keep the pups from floating off, but were subject to an unfortunate kelp entanglement.

Okay. I just checked, and there hasn’t been a recorded case of sea otters attacking cocker spaniels. That turns out to be a part of my fevered imagination, poor data retention, and the fact that sea otters are known to rape seal pups. Someone in Alaska did report an assault on his sled dog, but you never know about those stories. It’s lonely up there. Could be the guy just likes to whack his otter. 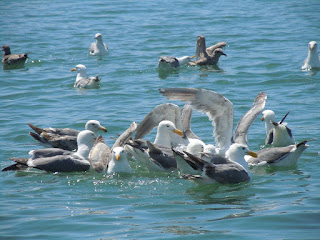 The whole species business gets crazy with birds. We have this urge to drop every living thing into its own slot, but birds have a way of ignoring the boundaries, and things change, and sometimes we decide to split a species, and sometimes we decide to lump two or more together, as was done with my juncos. There’s a whole committee devoted to this, and every year it gets together and decides if a given bird deserves its own designation or has to keep pretending it’s the same thing as a whole other bird. It’s like the Hall of Fame, and it’s contentious. Just ask Pete Rose-Breasted Grosbeak. But if you’re lazy and have a bird list, you could check it against the new lumps and splits every year, and maybe you’ll be able to add a Purple-Capped Fruit-Dove to your Crimson-Crowned Fruit-Dove without even getting your ass out of the Barcalounger. Birders love splits. I want my juncos re-split.

Meanwhile, dozens of gulls are soberly proclaimed to be different citizens on the basis of invisible dots on the bill and random imaginary variations on white and gray, seen against a mottled gray sky. I am willing to go along with lumps if we can call them all Seagulls, like everyone else does.