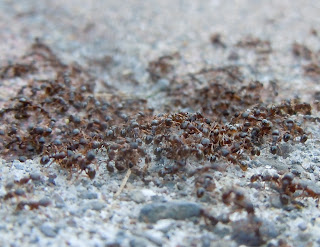 We thought we’d taken care of the Spring Ant Influx a few months ago. The regular army showed up every day for about a month and we batted them back with Windex until they gave up and went home, clean and shiny. All was quiet on the Northwestern Front for a few weeks and then they got modern. No longer are they sending out a battalion and risking mass obliteration. A grain of oatmeal, a stray fruit smear, even swatted fly meat, each will accumulate a score of ants within fifteen minutes of deposition. Their communications technology is sophisticated. The little buggers are now dropping formic acid and forming flash mobs. 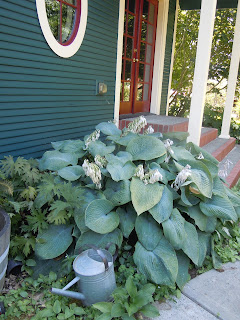 But I don’t have any garden slugs. I’ve got a hosta buffet out there for them and no one has showed up. You’re supposed to dispatch slugs with beer, but I don’t like to share. Slugs and ants are pretty much the entire pest roster out here. We don’t have many mosquitoes, gnats, ticks, Republicans, or black flies. And other people in town are complaining about the slugs, so I know they’re around. So I got to thinking:

Whereas: We have ants.
Whereas: We don’t have slugs.
Therefore: The ants must have creeped out the slugs.

I felt pretty confident about this conclusion. I do have a vestigial science degree and I understand how reasoning works, because I’ve seen it in the outside world. For instance:

Whereas: Barack Obama is black.
Whereas: I want to mine coal without regard to environmental or human health consequences.
Therefore: Voters should be required to show photo I.D. at the polls. 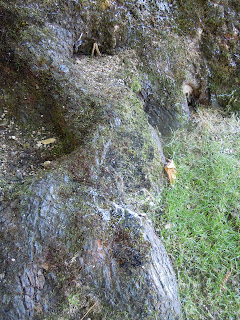 I can see no fallacy in this conclusion, unless you count the logical one. But when you’re practicing home science, you need to be open to new evidence that may alter your conclusions. And that’s what we found on a walk the other day. There was a large old tree in the parking strip. And it was covered with a foot-wide column of slime to a height of twelve feet, where the trunk tipped out over the sidewalk. I know what has happened here. A slug orgy has happened here. Our common garden slugs mate while suspended on a string of slime. They need to get high enough to be able to hang off something, and they’re well hung. Each slug has his or her own giant diaphanous sky-blue penis which it wraps around its mate’s and they remain in this position, twirling lasciviously, for hours. They are having way more fun than you ever thought of having. And the huge amount of slime on this tree indicates a multi-slug event, similar to what we used to call, in college, “spring break.” I marveled at the amount of goo that each slug had to emit to reach those heights. “They’re teenagers,” Dave explained.

So because I now have new evidence, I have revised my conclusion. I now believe I don’t have any slugs in my yard because the party is somewhere else this year, and the ants have nothing to do with it. Someone might also want to re-think the other conclusion, above.

Whereas: Barack Obama is president.
Whereas: I want to mine coal without regard to environmental or human health consequences.
Therefore: Gay marriage is a threat to the fabric of our civilization.