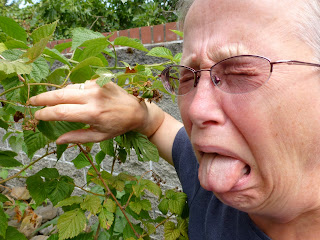 Sometimes I graze my way through my raspberry patch as efficiently nom nom nom as a caterpillar, and then I’ll pop one in my mouth and nom nom nom it will be all bleah patooie.


You can’t tell which ones are going to be all bleah patooie. What I assume is that I’ve gotten into a berry that a stink bug has just pooted on. Every now and then I see an actual stink bug. And then I think: are you a brown marmorated stink bug? And if you were, how would I tell? Would I look for…marmorations? And what would those look like? Shark music accompanies these thoughts.

“Marmorated” apparently means streaky-looking, or marbled. I see no reason the bug couldn’t have been called the Marbled Stink Bug. We already have plenty of other perfectly good marbled items, such as the marbled murrelet and the marbled salamander, and the word serves us just fine. “Marmorated” sounds like the bug has just had some countertops or flooring installed. But we’re stuck with it.

And we’re stuck with the bugs too. Sometime around the turn of the century (a phrase that used to mean something different when I was coming up) the first marmorated stink bugs arrived in or around Pennsylvania, and nobody thought it was a good idea, but now they’re all over the place. They’ve expanded their range to just about every eastern state–and Oregon. 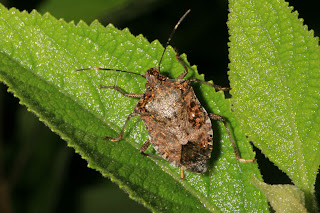 Unlike ladybugs, stink bugs are actual bugs. This means they are members of the order Hemiptera and they have sucking mouth parts. Most of us call just about any insect, arachnid, or small crustacean a “bug,” but you don’t want to make that mistake around an entomologist. They’re prickly about the distinction, and they probably have access to ways of making your life miserable.

Speaking of making your life miserable, that’s a specialty of the brown marmorated stink bug. They damage crops, especially fruit, like a lot of other bugs. They’re resistant to pesticides, because they jam their mouthparts into a fruit before sucking instead of licking the surface the way we’d like them to. But the worst thing about this particular stink bug is it wants to spend the winter inside your house. They will swarm in via any space they can fit through, and they’re flat–if your home does not have openings big enough for a stink bug to fit through, you probably aren’t getting enough air. Once inside, their plan is to hibernate, but it’s usually too warm, so they start banging into shit and stuff. And whenever they get upset, banging into shit and stuff, they emit a noxious odor through holes in their abdomens. They do this as a defense mechanism.

We employ a very similar defense mechanism in this household that keeps people away from us, including people who may have infectious diseases. Works good.

The brown marmorated stink bug is an invasive species. A species is called “introduced” if it shows up and mingles quietly by the punchbowl, but “invasive” if it spills out into the neighborhood and keeps everyone up. And I didn’t even need to look it up to know that the brown marmorated stink bug came from Asia. Every damn thing you don’t want comes from Asia, no offense. Japanese beetles. Asian swamp eels. Chili thrips. I had a bad bout of child thrips once, and you wouldn’t like it. (“Thrips” is both a singular and a plural. To everyone who already knew you can’t have just one thrip, I offer a kudo.) 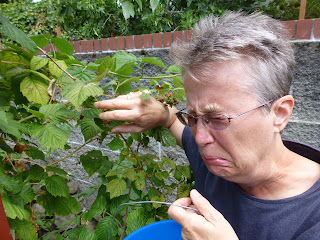 These populations might not take hold with a single introduction, but repeated invasions eventually do the trick, such as on ships that sail into a port regularly–a phenomenon known as “propagule pressure,” a bad bout of which I had once, and you wouldn’t like it.

One day dawn will arrive in the Western Hemisphere and everyone will have dropped dead of some respiratory crap that started out in some Asian chicken. The next day we will all have been buried in kudzu. And all we ever sent to Asia was the guppy, which isn’t bothering anybody. Oh, and our manufacturing jobs.