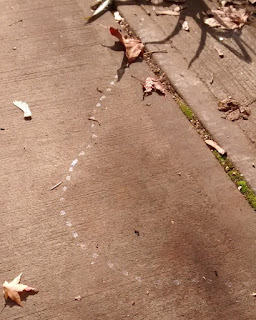 I spied a hyphenated slug trail the other day.

Slug trails themselves are not at all unusual around here. We have lots of slugs, and they’re always trying to get somewhere else, even if the place they end up isn’t any different from where they started. The main reason a slug produces a snot trail is to make a Slip ‘N’ Slide so it doesn’t scratch up its belly. (It’s not really called a belly–they call that whole bottom portion a “foot,” even though it’s really more like a zamboni.) Also, it is thought that other slugs can find each other by following their trails if they’re feeling sociable. And, of course, theoretically an individual can always use them to find its way back to where it’s been, although it never does.

There are many uses for the mucus they produce to make their trails. One memorable ancestral slug of my youth used his to make sure I never walked barefoot in the grass again. Human observers are able to examine the slug’s thought process by means of its trail, which usually wraps up in less than the width of a standard sidewalk. There’s the heroic first sally, followed by an arc of doubt, indecision, looping, and despair, culminating in desiccation or the Rapture, depending. The Rapture, in slugdom, is when the good slugs are lifted up and go straight to bird shit.

This particular slug trail worried me because it was like when you don’t have enough paint on your roller and there are dry bits on your wall at regular intervals. Slugs need a lot of paint on their rollers. They manufacture mucus from an area just below their mouths, right about where their foot starts. 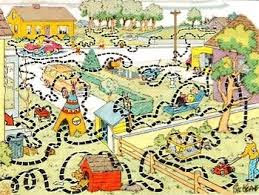 At first I was very excited about my hyphenated slug trail in case it was evidence  of a sense of sluggular humor. Slugs are known for randiness and ick, but not really humor, so much. But what I saw on the sidewalk was precisely the joke in the comic strip Family Circus. Little Billy is supposed to come straight home but never does. He goes all over the place! Ha ha! It’s such a staple of hilarity you can count on seeing it every couple weeks. Could my hyphenated gastropod be pulling a funny? Comedy has to start somewhere. There’s a lot of evolution involved before you get to true stand-up, as pioneered by the meerkat family.

We like it damp here, and so do slugs. You could dang near navigate by slug trail on a full moon night. So when a Facebook friend posted a photo of a heavily slimed tree and asked whatever it could be–tree sap was the prevailing guess–I informed him he was looking at the aftermath of a slug orgy. I was right, too, but for some reason no one believes me anymore. [At least, not since the time I declared that a group of caterpillars once beat up a famous entomologist, trashed his place, stole his coin collection, and bought a bunch of meth.] 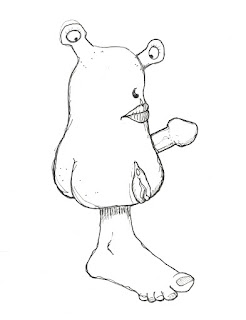 The hyphens! That’s it! Slugs got only one foot! They’re hopping!