All Bloom And Bluster 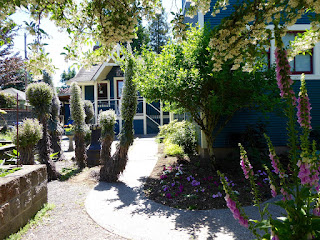 Truth be told, the foxglove population here has been demoralized for years. It started when the Echium “Mr. Happy” was brought home in his little four-inch pot and settled in the ground. Not much to look at, at first, but his tag was all braggadocio. He was going to be something, boy howdy. Ten-foot spike with impressive girth, like you’ve never seen.

Some of the foxgloves warned, darkly, that this was going to be trouble, and kept going on and on about this being one more northern foothold in the Californification of the garden, blah blah blah. But no one cared. Mr. Happy wasn’t bothering anyone else. The annuals gabbled away as the one-season wonders they were. It’s just a big ol’ rosette, they said. The more the merrier, and all that.

But the foxgloves had been the dominant biennial flower spike of the region for a couple hundred years, and they had a more mature perspective. Nothing good could come of this. Have you no sense of heritage, they said? This is not normal, they said.

Pssh. The zinnias didn’t care for all this gloom and doom, and, if they were to be honest, they thought the foxgloves could stand to be knocked down a peg. Don’t worry about it, they nattered, unbearably cheerful as always.  No way he’s going to make it through the winter. He’s a flash in the pan. 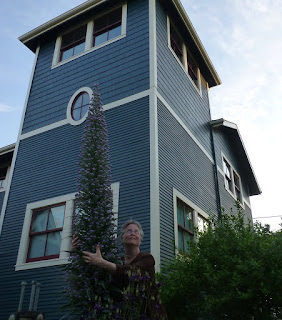 The foxgloves began to relax. Mr. Happy was a buffoon, a joke. He’s just an entertainer–he’s not going to ascend to his bloom year. The foxgloves settled into proper dormancy for the winter confident that the upstart would be revealed to be the clown he was, come spring. But they had not counted on all the behind-the-scenes support from unknown benefactors. The plastic wrap. The light bulb.

And to their shock, the next spring, there he was, still among the living, and he quickly shot up into the sky, surpassing the foxgloves in height, girth, and glory, and proceeded to go on and on about himself all summer long. The annuals were impressed. Annuals are easily impressed.

The foxgloves conferred and came up with some proposals but nothing made it out of committee. It was infuriating, they thought. How could it not be obvious that Mr. Happy was an impostor, a bluffer, a fraud, nothing but a big-ass tower of bloom and bluster with no qualifications whatsoever? How could he be Number One? Why are the zinnias falling for this fool? 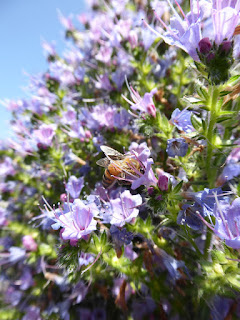 
The foxgloves grumbled helplessly. Job producer, my plump pink petals, they said. Bees will work for nothing. Employment numbers don’t mean anything  if everyone has to work five thousand blossoms a day just to make it.

And so on. Until this year.

It started with murmurings in the understory. Sharing of scuttlebutt. Botanical buzz. The first stirring of hope among the beleaguered foxglove community, and whispers that their long, yardular nightmare may be coming to an end. Mr. Happy’s grandkids have arrived. 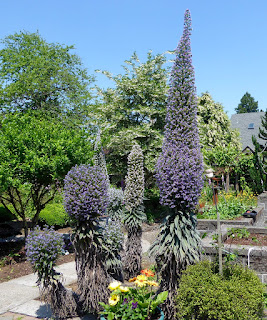 And what a motley crew they are. Pinko. Stubby. Knobbles. Slim Jim. Fuzzball. Who’s your daddy, Mr. Happy? Hmm? Because there’s a lot going on in this woodpile. Different sizes. Shapes. Colors.

The foxgloves want it to be known they have no trouble with a little color variation. But they have a feeling Mr. Happy’s base doesn’t see it the same way. Heh heh.