All Dressed Up For The Brawl 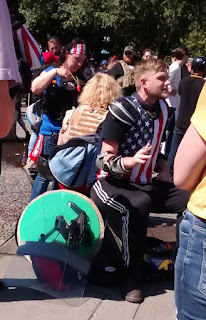 What rallies, Dave wanted to know?

That would be your Patriot Prayer rally, with guest appearances from the Proud Boys, plus the other contestants, Antifa and a group of Reg’lar People like us.

Who are the Proud Boys, Dave wanted to know?

Dave elected not to pursue.

Patriot Prayer is a right-wing group based in nearby Vancouver, Washington, where people from Portland go if they want to escape the tyranny of taxes and decent civilization. “Patriot Prayer” is one of those names you cook up if you want to rattle the opposition with otherwise inoffensive words. Like if I started a group called “Divine Uterus.” 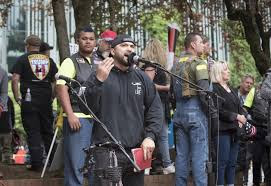 We walked along the waterfront; I’d heard that was where the action was. There were blue flashing police lights in the distance. The closer we got, the more people seemed to be wearing outfits. Everyone gets an outfit! We were puzzled. Some of the people–all right, they were all men–were wearing American flags. Some of them had bandanas over their faces. Some had, what do you call them, flak jackets? Big puffy vests anyway–not at all slimming. Everyone was playing dress-up.

“I can’t tell who is who,” I told Dave. The folks who had cut up flags into clothing might appear to be our vaunted Praying Patriots, but maybe the flag was being worn ironically. There didn’t seem to be much violence in the air at this point, just a lot of milling about, although the Patriots had promised to come packing.

Per my query, a gentleman explained he was wearing a bullet-proof vest to protect him from the counter-demonstrators.

Evidently not. They were here to demonstrate free speech, or something. I’m all for it. ACLU supporter and everything. Their little get-ups looked more like a provocation than protection but in either case that’s free speech too. I’m not sure why they’re worked up about it. We do have free speech. Could it be they think free speech means nobody is allowed to object to it?

The gentleman next to the large bullet-proof fellow was saying something about the state of our country that–I’m sorry, I know it’s not polite–made me laugh out loud at him. Kind of a lot. Also I may have blown a fart noise at him. Twice. Whereupon he loudly informed me that I’m in fucking denial.

I believe the inciting comment was “It was Obama who divided us, as soon as he got in.”

Huh. Well, he did flush out the bigots pretty fast, I’ll give him that.

But, sonny! Why get all het up about free speech and then spend it on profanity? Never mind. I have other questions. 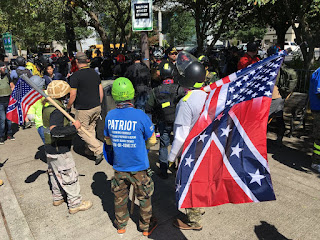 Why call yourself Patriots and then turn around and desecrate the flag?

Do you have star-spangled underpants on too?

About that Prayer. Didst thou know thou art to enter into thy closet, and when thou hast shut thy door, pray to thy Father which is in secret; and thy Father which seeth in secret shall reward thee openly? Of course thou did. Everyone knowth that.

Dave began to steer me away. He is not a macho dude and has never, and would never, intervene in any fight I might want to pick. Unless he senses I’m in actual danger, which hasn’t happened yet. Nevertheless, he doesn’t care for my interest in picking fights with Nazis. 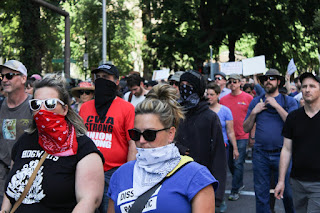 We walked a bit from the epicenter of things and only then discovered that all of the dressed-up boys were far-right types, and then there was a four-lane street with police in it, and then on the other side was the crowd of anti-fascists and Reg’lar People like us. It’s like the Revolutionary War. Everyone gets spruced up in their uniforms and colors, and then they stand in a line and face each other, and maybe there will be some blam-blam. It always seemed like a silly way to conduct a war, albeit orderly. When Dave and I came up on the backside of our merry Patriots, we were accidental guerrillas.

Anyway that was the whole problem. Here we were, just a little late for the ceremony, and there wasn’t an usher to direct us to the correct side of the aisle. Our friends were over there, and here we were with the batshit brigade. Oh, well. Do you, Dave, and you, Murr, promise to defend the Constitution and fight the forces of autocracy and hatred for as long as you both shall live?