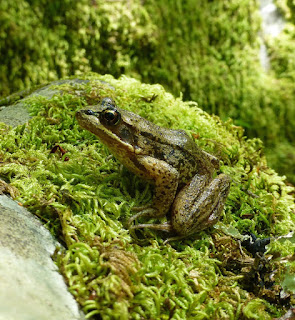 It’s early April and the frog-shuttling season is just about buttoned up.

There are over seventy of us humans in the Harborton Frog Shuttle, all ready to pop out on a nice wet night and scoop up frogs in a bucket before we’d have to scoop them with a spatula. They want to get to their wetland and make new frogs, and they have to cross Highway 30 to do it. God did not install Highway 30, and whoever did wasn’t doing it for the frogs. 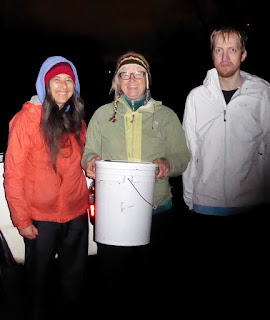 The season can be long. We’re on the alert for downhill movement as early as November, but don’t generally see much action until late December. By February we’re ferrying frogs back uphill until we run out of customers, which is usually around the end of March. It seems like an onerous burden, but we split up into nightly teams, so we each need to keep only one night a week open on our calendars.

I’m the co-captain of the Monday team. That’s not as fancy as it sounds. That means the five percent of the time the real captain, Captain Jane, can’t make it, my sorry fanny is enlisted to gather the troops, locate the buckets and safety vests, apologize all night long if the frogs don’t show, and possibly screw up the data log. But the Monday Nighters are forgiving sorts. The Monday Nighters rock. 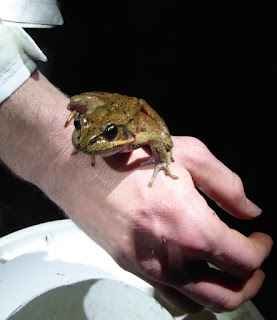 Each of us has one eye on the weather report for four months and a pocket of our consciousness devoted to the well-being of our extended frog family. They’re like any other kids. They don’t like the discipline of the bucket, but we’re grownups: we don’t expect gratitude. We just want grandbabies some day, and all will be forgiven.

Most years we shuttle about 800 frogs. Last year we had only half that many, and a stone on our hearts. This year we were really excited. We scooped up over 1200 frogs early on! Only 90 of them were females, but that was expected. The males always dominate the early migration. They have enthusiasm. They have spunk. Great Gosh-A-Mighty, they have spunk. The females will be along later. They’re bloated with eggs and they’ll get there when they get there, Sparky. We awaited another warm, wet night and a deluge of females. And we waited.

But night after night, it was too cold. And when it wasn’t too cold it was too dry. And somewhere around the middle of March, the males gave up. They started back uphill. The way-outnumbered females did too; they’d had it. It’s looking like the worst season so far.

We don’t know what gravid females do with their eggs if they can’t get to a pond. We don’t know if they’re reabsorbed or if the ladies just have the world’s worst period and bitch at the salamanders. We did find one doomed egg mass in a trickle of water along the highway shoulder. We don’t know what to blame, except the weather. I’m perfectly willing to assign this little calamity to Mitch McConnell and Charles Koch, of course, and I can even draw a few straight lines to do it. 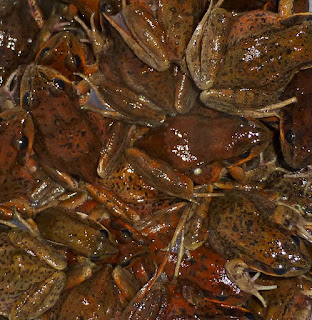 But I don’t want those soulless monsters residing in my head any longer than I have to. That’s where our frog family lives. We can’t forestall the catastrophe that’s coming, but we can improve the world one pink frog at a time, at least for a while. And so that’s what we’re going to do.