All Of This Is True 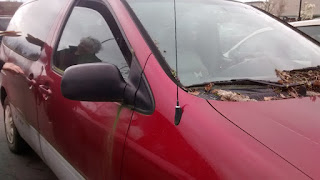 My friend Katie has an artistic nature. She is able to look at almost anything and find the beauty in it, and concoct a plan for it. She will rescue it, and collect it, fully intending to repurpose it. Anything. Plastics. Scrap metal. Refuse. Things that ordinary people would look at and see only junk.

Katie and her home are much burdened by her artistic nature. So I was happy to drive her out to the country to fetch her new car. A new car! Her friend Harreld was coming along too. “In case it blows up before I can get it home,” she explains.

So it’s not a new car, precisely. Precisely, it is a 17-year-old Toyota van that has been parked in a field in the rain for a few years. “It’s a good deal,” she said. 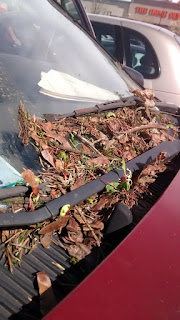 We arrived at a ranch house at the butt end of a dismal cul-de-sac and were ushered into the back yard, which was entirely graveled and contained no fewer than 23 cars, plus some large metal hangars with unknown contents. Katie’s new car was toward the rear. It didn’t look too bad. Sort of mossy.

I looked around. Something about this seemed awfully familiar. We used to have two immigrant Russian families on our block. Both were fully involved in the business of accumulating wrecked vehicles of dubious provenance, getting them marginally roadworthy, and selling them for cash. Apparently it’s a thing. In the old country, nobody had a car newer than thirty years old, and all the boys grew up knowing how to keep them going. They also developed skill at body work, using a combination of tin foil, flour paste, and guile. Vehicles showed up in their yards and disappeared later. It was mighty seedy.

Harreld pointed at the back row.  “Hey, I know who owns that car,” he said, pulling out his phone. Uh-oh.

I walked over to Katie’s car, where the proprietor was just latching the hood. “Iss purring like kitten,” he said, wiping his hands on his sweatshirt. “Please to keep running for few hours while battery charges.” 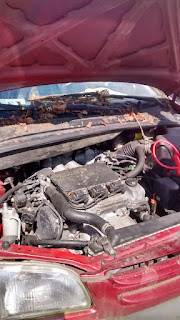 “Katie, I don’t think you should buy this car,” I whispered.

“Aww, that’s what Harreld said. And his friend Chris,” she added. She looked disappointed. She was sincerely interested in our opinions, because if they supported the choice she’d already made, she would feel even better about it. She began to peel $100 bills out of her wallet. “I’ve never seen these new bills before,” she chirped. The man held his palm out, expressionless. He had.

Meanwhile, curious, I walked over to the driver’s door, which had a hole where the handle should have been, intending to peer in the open window. A stench billowed out that could drop a jackal pack. It was urine-forward, with notes of buzzard poop and bay-bottom, and a mystery element. The climate hasn’t taken a hit like this since Satan’s soil-pipe backed up. The seats were shredded, and the floorboards were littered with condiment packets, ripped-open registered mail, and, after a moment, my eyebrows.

“You have got to be kidding me,” I hissed at Katie, reeling away, as the last $100 changed hands. “The hantaviruses are thick enough in there to make paste.” 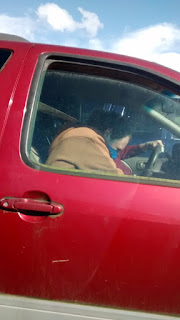 Harreld affixed a damp kerchief to his nose and lowered himself bleakly into the passenger seat like a man going to his own execution, and I followed them in my car as they headed toward the DMV to get the title changed. Dandelions shriveled in their wake. Katie lurched unevenly onto the freeway, weak from fumes and unaided by the driver’s-side mirror, which was missing. A kettle of vultures formed above the convoy. Katie pulled into the lot, turned off the ignition, and a plume of steam belched out from under the hood and into the sky. One of the vultures sputtered, stalled, and corkscrewed into the pavement. Harreld creaked open his door, tilted out, and stood for a minute, swaying.

“That’s not good,” he rasped, pointing at the hood.

“Is it steam or smoke?” Katie wanted to know.

“Either way,” Harreld said, bent over with his hands on his knees, “not good.”

But Katie’s luck had turned. There were fewer than thirty people in line ahead of her in the DMV. She began to fill out a form on a clipboard. Could Harreld go out and check the odometer reading? He could. She had almost everything filled out when he came back in and reported that he couldn’t read the odometer because the car wouldn’t start.

At Harreld’s suggestion, we went to buy a battery charger, and returned to the lot. He hooked it up and checked the coolant reservoir, which was bone-dry. He bought water. Juice trickled into the battery, which was acting like a dying man turning his face to the wall, and then quit.

Towing was going to be steep. Harreld suggested she join Triple A and get free towing. It would be cheaper, even with the membership fee. Next thing we knew Katie was on the phone with Triple A and explaining that she’d just bought this lemon car and wanted to join up so she could…

Harreld was waving his arms like a crazy person. “Hang up! Hang up! Jeez! Go on line and sign up, then call.”


Katie went on line. Signed up. Then called. “Hello, I need a tow–my membership number? Sure thing. Oh, you might not see it yet, because I just joined five minutes ago, because I just bought this lemon car, and…”

Harreld smacked himself in the head repeatedly.

Katie hung up. “He’ll be here in a half hour,” she said. “And it’s going to be $67 dollars because it was a pre-existing condition.”

“You know,” I said, “you could just get this thing towed right back to that Russian guy and maybe get your $1000 back. Or even just a part of it. You’d be money ahead, in the long run.” 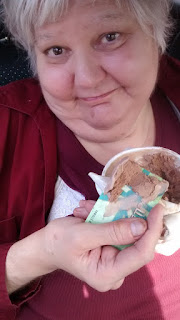 “And the ice cream,” Katie pointed out. Harreld had thoughtfully bought her a resuscitative pint of ice cream, which she was currently shoveling into her mouth with a credit card.

“And you’ll need all new seats, plus the dump fee for the old ones, and a new door, and whatever they charge over at Ghostbusters.” It was getting warm, but I rolled up my car windows because I’d parked too close to the death van. Napalm had nothing on that thing. Something really horrible had happened in there. There was some mystery element to the reek; I couldn’t put my finger on it. “Tell you what. You could get the guy to tow it to a boat ramp, put five hundred bucks in the glove box, set it on fire, and sink it in a lake, and you’d still be money ahead. In the long run.”

“Naah,” she said, resigned and beginning to sound a little depressed. “At least I learned one thing. I  should always listen to my friends.”

“YOU DIDN’T LEARN THAT AT ALL! I JUST TOLD YOU WHAT TO DO AND YOU TOTALLY IGNORED ME! AGAIN!”

“I said, I learned I should listen to my friends.”

Harreld checked the progress from the battery charger again–there was none–and we occupied ourselves while waiting for the tow truck by poking around the van for knick-knacks, accessories, and crime scene clues. All we turned up was six or seven extra keys, none of which opened the rear hatch, and a wasp’s nest. 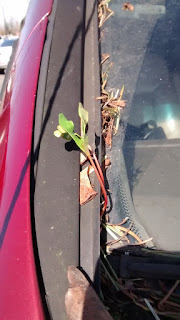 The tow truck driver was young, polite, and no fun at all. He sold Katie a new battery, checked the electronics, pronounced everything in good shape, and assured her she’d done just fine.

“I’ve seen worse,” he said, beginning to wheeze, as clumps of his hair drifted away on the breeze. Harreld and I looked at each other in despair. How was she ever going to learn with Pollyanna Pete over there? Already she was starting to perk up, dreamily plucking small maple trees out of the weather-stripping. Her eyes softened as she visualized the interior artistically shingled with Little Tree air fresheners.

“Really, Toyotas run forever. You get a car like this that’s been out in the rain for a long time, you’re just going to have problems with belts and leakage. Your seals, and such.”

The mystery element! That was it. A dead seal.