An Open Bag Of Internet 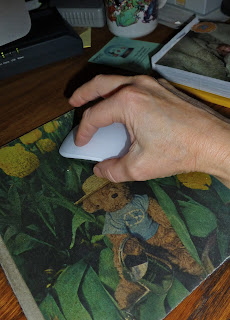 If there’s an open bag of potato chips in the house, I’m going to hoover them up, and I’m the same way with the internet. You open a bag of internet and I’m going in head-first, and I’ll still be up at one in the morning dabbing at the little salty bits on the bottom. So if I want to air out my brainwaves, I try to go places it can’t reach, like our backwards little cabin. Or I go for a walk without taking any of the fun-size internet snack devices. If I don’t respond right away to your comments, it’s probably because I’m deliberately off the grid.

But not always. Sometimes I’m just dealing with random computer obstrepery. The other day I’m flying along tacking up comments in this space when for no reason whatsoever I click on the “reply” button and nothing happens. I have a plan, because I wasn’t just born yesterday. If I had been born yesterday, I’d probably have a better plan. I click harder. I really do. I center the cursor, I press down with due deliberation, I wait an extra beat, then I let up. I do this because every now and then the computer, which is having gastric distress, happens to relieve itself at the very moment I am pressing on the button. So I have convinced myself I fixed it. Because that’s how cause-and-effect works. It works however you want it to. If it didn’t, there wouldn’t be so many people using the phrase “job-killing taxes.” 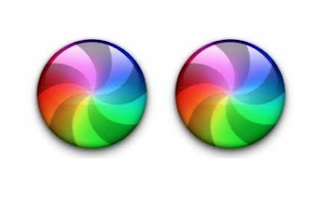 But most of the time clicking harder doesn’t work. And if I decide to ignore its little snit, and play somewhere else on the internet, I soon discover that the whole thing is acting up. It is acting like the sullen teenager you have given a simple task to, balking and scuffling its feet. Sometimes you can even see its impudent little eyes rolling. That’s when you give it a time-out. That’s what the techies usually tell me to do when I call them–pull the plug. 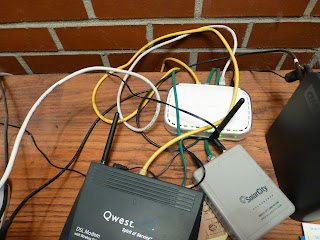 What a quaint expression! It harkens back to the days when things had A Plug, and you could Pull It. What I have in the nether regions of my desk looks like it should come with meatballs and a nice Chianti. I hover over the assemblage with the trepidation of the new guy on the bomb squad. I have a black cord, a white cord, a green cord, and a yellow cord, and several boxes they are servicing. One of them is a modem, I don’t know which one, and one of them is, I believe, the Flux Capacitor, function unknown. I select the black cord and pull it out of the two boxes. The chip clip is now back on the bag and it’s on a high shelf in the cupboard.

Now it’s time to get something useful done. 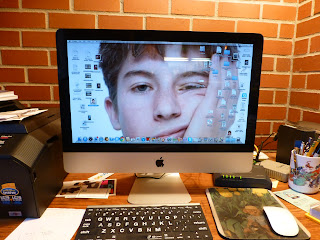 Well, that’s the trouble with kids. You’d think the moody little bastards would be real easy to ignore, once you’ve sent them to their room, but after a while you start thinking about how great they could be if only they applied themselves, and you let them back out.

The adolescent computer is better than my new printer, which is more like an alcoholic husband. When it’s working, it’s fast as hell. Spits out a page like it’s throwing a beer can across the room. Other times you ask nicely and it starts to work and then shuts right down in the middle of it, and that’s supposed to be your fault. Next day it’s sweet as pie. Classic abusive behavior, designed to keep you off balance. But I’m no dewy-eyed bride. I am going to fix that thing, as soon as I locate a hatchet. 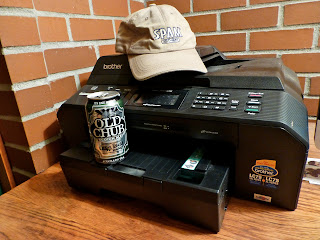 This stuff used to get to me more than it does now. Dealing with computer moodiness in the early days used to aggravate me no end, because it made me feel so stupid. My friend Walter used to talk me down, using an observation I never heard anyone else make. “These machines haven’t been around very long,” he said. “They’re just not that good yet.”

Pointing out another classic cause-and-effect fallacy, he told me: “just because you have trouble with them doesn’t mean you’re stupid.” And that is true.

Of course, it doesn’t rule it out.