And It Makes Its Own Gravy 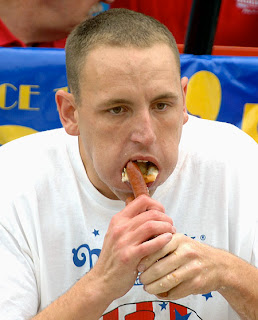 This just in from Las Vegas: Mr. Joey Chestnut is the winner of the Martorano’s Masters Meatball Eating Championship. Mr. Chestnut is turning the world of competitive gluttony on its head, or at least reversing its peristalsis. It was a stirring moment in meatball consumption, but perhaps the most compelling story of the day is that of Pat “Deep Dish” Bertoletti, who came in second, one meatball shy of glory. To him I would offer the same condolences I always do: don’t beat yourself up. True, there’s not much glory in being the Number Two meatball guy, but, outside of Las Vegas, there’s not that much glory in being number one, either. Same observation applies to anybody who accumulates stuff of any kind.

I’m notoriously squeamish about watching or listening to people eat, if they’re not reasonable about it, and competitive eaters (yes, it’s a sport) tend towards hyena sensibilities. However, I’d be in the front row at the Meatball Invitational if it was a choice between watching that or the the Alka-Seltzer US Open of Competitive Eating, which is described as a three-hour elimination tournament. Check, please! 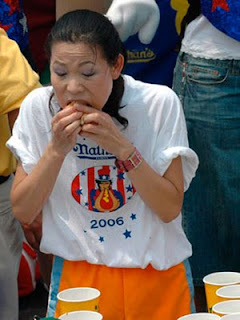 And, in truth, Mr. Bertoletti has gained something that Mr. Chestnut has not. There is a certain magic number of meatballs beyond which you cannot suffer one more, and he now knows what that number is (49). Unfortunately for the rest of us, this is not a universal number. No, everyone has his own Personal Meatball Standard, but at least Mr. Bertoletti will have his PMS for the rest of his days.
A tiny woman has dominated these events for some time. Sonya Thomas holds records in oysters, lobster, tater tots, deep-fried asparagus, and much more, while maintaining a fighting weight of around a hundred pounds, making women everywhere proud and a little pissed off. Over the last few years, she had been mopping the floor with her competition, until Joey Chestnut kept coming up and coming up. 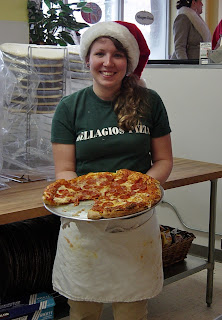 In spite of myself, I’m drawn to these stories. Early on in my friendship with the man who is now my husband, we found ourselves with friends in a local pizza parlor, and the waiter plopped down an extra-large pie on a nearby table. Our friend made some sort of comment about how enormous it was, and Dave instantly announced that I could eat one of them by myself. “No way!” came the response. “If she can eat that whole pie, I’ll buy it, and I’ll buy all the beer, too.”
“You’re on!” Dave roared, without consulting me in any way, and the pizza was duly ordered and fetched out. I do like pizza. Dave continued to rave. “My baby can really pack it away. There’s no limit to what she can put down. Damn, she can eat.” A girl doesn’t forget that kind of support. Although the beer helps. 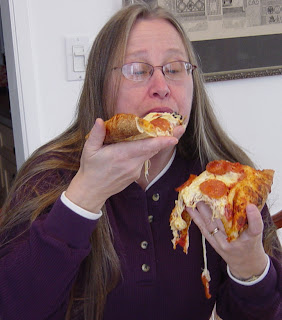 Dave is not a gambling man. There was never any question but that I could dispatch that pizza. It disappeared in due order, and Dave, in a show of solidarity, swelled with pride. There may be some circles in which the ability to hoover a pizza the size of a manhole cover would not be considered an attractive quality, but those circles do not include Dave, who married me a few years later. Maybe it was my demonstrated ability to win free beer, but I’d like to think that there are some men secure enough to admire a woman who can look at life and all its challenges right in the eye and say, “Is there any more pepperoni?”
And every woman cherishes a man who will always stand behind her, even if that puts him in total eclipse.
By Murr Brewster|2021-11-09T21:30:41-08:00February 6, 2010|Uncategorized|2 Comments