And It’s High Time, Too 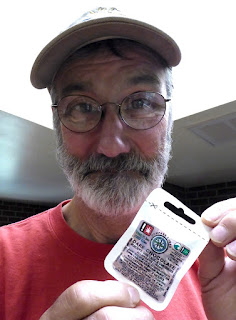 It’s 2016, the Baby Boomers have been in charge for decades, we’re in a perpetual state of war, pot’s still illegal, and I’m as surprised as anybody. We didn’t have the tightest grip on our principles when we were young but those two items–legal pot and no more war–sure seemed solid at the time.

Recreational pot is now legal in a few backwaters such as my own state of Oregon, though. When I was young, I visualized legal pot as being just like regular pot only not illegal. That is, you’d come by it because you knew a guy, or knew a guy who knew a guy, and you’d buy a big bag of it and roll your own. Or you’d have plants in your garden. I didn’t quite imagine going into a store and picking something off the shelf.

And if I did, and I squinted hard into the future, I suppose I would have imagined a store that looked like an old-time apothecary, with its shelves of gleaming labeled jars and a middle-aged fellow in muttonchops and a cap sweeping dust off the wide-plank floors, only with the Twinkie aisle of a Seven-Eleven running right down the middle. 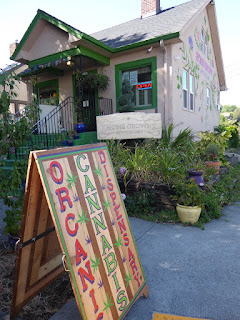 My own history with pot began with giggles and ended with Whoa Nelly Just Bring Me Back And I’ll Never Do This Again. (More than once.) We passed little joints around, we got comfortably high. Then I went to England for my junior year and there the kids rolled joints the size of canoes and passed them around with both hands. Different style, same result. I returned to the U.S. in 1973 and something horticultural had happened in my absence. The same size toke I’d taken two years earlier now sent me to the edge of a precipice. The ground I stood on was “my life until now” and the ravine was “and here is insanity.” Hang on and hope the cliff doesn’t crumble.

I’m not interested in pot anymore, but Dave and I decided to visit a pot store just to see how it was set up, and also because sometimes Dave and I would both prefer he was in a different mood than the one he’s in. The place we picked out (there’s one next to every Starbucks) actually says “Apothecary” on it, and sure enough there are shelves of little glass jars, but that was just their front room, and the jars held their homemade essential oils. It seemed wholesome as hell. Right up until Dave disappeared behind an ominously locked door. If you wanted to buy some pot, you had to be escorted to the inner sanctum, and you had to show your I.D. I didn’t have my I.D. on me, so Dave went in alone. 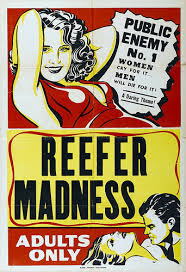 Well. The locked door. I know what’s behind the locked door. That’s where the lady in the lascivious vintage ’50s dress was reclining on the davenport with a crazed, and nonetheless come-hither, look, deep in the throes of reefer madness. Maybe she was for sale too. I frowned at the door until Dave came back out, which was more promptly than he would have if the reefer-madness lady had been available.

They’re real sophisticated about pot now. They’ve been hybridizing the stuff for decades and now they differentiate it by which little letters it has in it. You have your high-THC pot and your high-CBD pot. Used to be someone would hand you some and say it was all right or it was really good stuff, man and you kind of took  his word for it–that was about it for quality assurance. Now they have head pot and body pot. They have pot for karaoke night and pot for an hour of hula-hoops. They have pot for lower back pain and cancer pot and hangnail pot. Give the Budmaster a list of things you want adjusted (“spider bite, fibromyalgia, gloom”) and he’ll look thoughtful and select a particular product. They’ve got it dialed in. They’ll sell you raw, rolled, edible. Brownies, cookies, chocolates. One variety for in-law visits, one for Walking Dead marathons. For the budget-minded, the Mailman Special (floor sweepings). You name it.

“If you haven’t had any pot for thirty years, I recommend taking just a half dose for starters and see how it goes,” the good woman at the register said, selling him two doses.

He went home and took a half dose. Then he ate the rest of it, because chocolate. Got a thoughtful look to him. Slept all night. Take that, F.D.A.