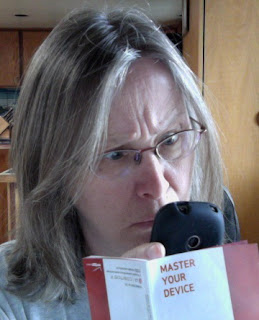 Picture the Amish gentlewoman at Sears, looking over the Kenmore dryers, her face etched in regret and resignation, deeply suspicious that her purchase might cause her to lose more than she gains. It’s the classic tradeoff: warm fluffy sheets in exchange for a whole way of life. Throw some stretch jeans on that woman and you’ve got me at the big-box store trying to find someone to talk to me about mobile cellular telephones.

He’s not easy to find. There are no sales associates in the store who were alive before cell phones. They stare at you mute when you explain that on your own phone you have to go out to the front yard and turn the crank on the spark generator to get enough steam to put a call through. They have no point of reference to know you’re kidding, and no idea how to react, and they go limp with embarrassment. 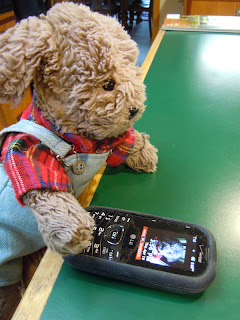 If you take all the people who have never owned a cell phone and lay them end to end, they can all hear each other, even without the string and cans. It’s an exclusive group, and we cannot abandon it lightly. Dave and I pretty much knew we’d get cell phones eventually, and have seen many times when one would come in handy. I’ve got a trip coming up and now seems to be the time to pull the trigger. I once covered the better part of two airport concourses before I found a pay phone. I dumped in quarters and called my ride, while she was at the curb watching me do it and waving. 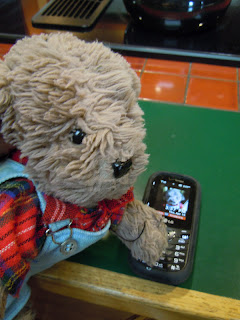 On our last trip, we rented a car. I asked the winsome twenty-year-old at the desk if she had a New Mexico map for me, and she produced a nice simple version on what looked like a paper placemat. We walked out to our car, which was already running, and she handed me a plastic souvenir knob and wished us well. I got in, and then realized there was no key in the ignition, and I didn’t know how to turn the car off, which I anticipated having to do, so I went back in the office to ask. She explained that the plastic knob allowed me to push the button. Oh! I explained that my car didn’t have any doo-dads on it at all. It was a tiny little thing with a steering wheel and go-and-stop pedals and nothing else–it’s not much more than a big helmet. If I had any more questions, the nice young lady said, I could give her a call. No I can’t, I said. We don’t have cell phones. She looked stricken. Did we know where we were going? Did we bring our own GPS? I told her no, but we were fine, with that nice map she gave us.

But, she said. She looked worried. Oh, she was worried. She couldn’t have looked more upset if she had been laid up with a busted foot and had to send MeeMaw out into the snowstorm on the bum mule to fetch Doc Pritchart. And it was absolutely clear to us that she herself had no idea how to get to Los Alamos using just her own neurons and a placemat map.  She may not get lost, with all her tools, but she has lost something.

But when we finally made the jump, I always thought, we would try to find the dumbest possible phone. You know, one that can only allow you to talk to someone in Thailand while you’re lugging out the trash. I have no idea what texting is for. And Dave doesn’t have the paws for it in any case. It would be like trying to play hop-scotch in clown shoes. 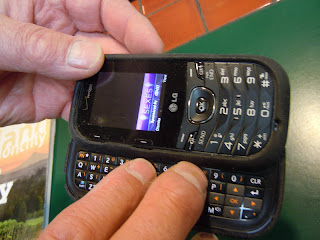 Then the iPhone came out and it was pretty clear that it was a wonderful item. You could point it at the sky and find out what stars you were looking at. Name a tree by taking a photo of a leaf. Dave could  hook up to the site where he snoops on people’s houses and finds out what they pay in taxes and how many bedrooms they have. He does that anyway, back at home, but now he could do it while standing in their very driveway looking big and sketchy. There are millions of apps. Probably one that will figure out what you were going to say. After a certain amount of hesitation on your part, the voice lady will pipe up and say “I have found nine nouns for you.” It was a seductive idea. No longer would Dave and I have to walk around having our normal conversation: what was the name of that woman, you know that woman, the one in the show, the show with the guy who did that thing, you know that guy, he used to be in that other show? We would have the answer to everything in our little warbling pockets. We might not even have to talk at all. We could just amble on in parallel, peering into our little screens. All that for about a hundred bucks a month. It seemed a dream.

But are the fluffy sheets of unlimited data worth what we’d lose? As it is now, we have only one computer. It’s a nice one, but not portable, so when we walk away from it, we can talk to each other, and notice the world. In fact, having only the one computer, we talk to each other all of the time.

Mostly, we say “can I have that machine now?” 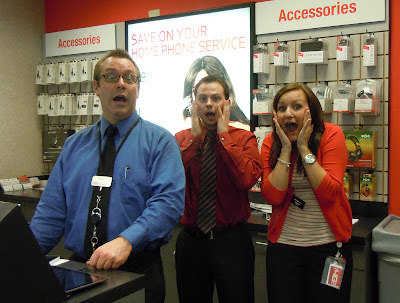 We did it. We got our own dumb phones. The staff at the store said the last time someone came in and bought his first phone was last summer. Unless it was the summer before that.