And So Flaky, Too 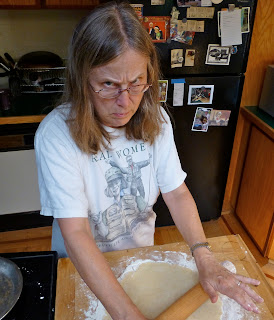 It’s pie season around here again and I’m gathering all my ingredients, but I usually run out of something. Flour, patience. You come up short a half cup of patience and it’s liable to make all your pies damp, scabby and airborne. It probably doesn’t help with the patience supply that it’s election season, but unless I make all my pies in January of an odd-numbered year I’m just going to have to soldier on. I am writing this post in advance of actually putting the pies together, because afterwards I will be drinking strenuously, which affects my computer screen.

I bake all my pies and freeze them. Some people freeze them unbaked. I didn’t know which was better so I Googled it. The first eight articles that came up contradicted each other. The only thing they all agree on is that the pies are good in the freezer for “up to four months.” I have eaten pies that have been in the freezer for three years. They tasted great. Know why? They’re pie. I am already pre-aggravated because I’m about to start making pie, and I find it aggravating that there’s no consensus on this. If any of you have any great tips on freezing pies, keep them to yourself. 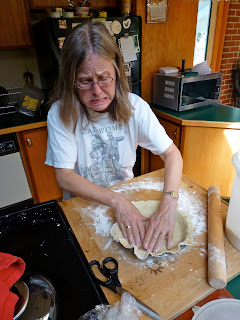 There are several pie crust recipes I’ve been known to use, the tastiest of which is Mary Ann’s famous hazelnut crust, which I use exclusively for the huckleberry pies on account of their preciousness. It takes hours to pick enough fish-egg-sized berries for one pie in a good year, and this is not a good year. Mary Ann and I went up to the mountain to pick and ended up lurching across ravines and through stickery bush patches just because we thought we saw a bush with three berries on it the size of mouse eyes. We put in five hours and I think I’ll have enough for a single pie if I don’t filter out the fir needles, spiders, and deer poop. The good news is, that means I only need to roll out two hazelnut crusts this year. You can seriously run down your serenity stash with a hazelnut crust. 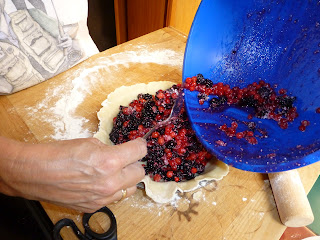 So, for the other pies, I’ve decided to go with good ol’ Mom’s pie crust recipe. It, at least, gets me in a good mood to begin with. It’s typed on a yellowed piece of notebook paper and pasted into my recipe book. Mom typed five thousand words a minute and, most years, didn’t get her first typo until mid-May. So there are no typos in this recipe. It’s called “Foolproof Piecrust,” which is more alarming to me than reassuring. With a mind for provenance, Mom typed at the top “From Woman’s Day 11/74” and “Bobbie sent it to me.” From this I conclude it isn’t her original pie crust recipe from my childhood, but I won’t know the difference, because I was a picky eater and never tried  her pie. I didn’t think I’d like it because it didn’t look like cake. When I finally ate Mom’s apple pie as an adult, I wondered if a person could eat retroactive pie. 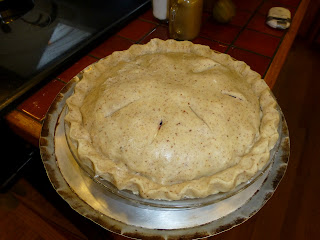 Foolproof Piecrust is made with vegetable shortening. So it’s easier to make now because of one of the great modern inventions: Crisco in stick form. When I first started making pie, I’d have to come up with 3/4 cups shortening by filling a measuring cup with 1/4 cup water and blobbing in spoonfuls of Crisco  until the water comes up to the one-cup mark, then pouring out the water. This was how it was taught to me in Home Ec (for you young people, this is the course in which you learn how to make a gingham apron, a cheeseball, and how to apply makeup, but you still won’t know how to make an ashtray or an end table). It results in slimy hands, watery shortening, and another slice out of your serenity, and it still won’t be accurately measured. The Crisco sticks eliminate all that. They come in individual plastic tubs that will swirl around in the ocean for millions of years, but I never said I was a perfect liberal.

It also calls for a large egg. I have never seen a recipe that calls for any other size egg. And I never have known whether they want an egg graded Large or if they want a large egg. After all, there are Extra Large and Jumbo eggs, and those are really large. Today, it doesn’t matter. I only have a Medium egg, so  in it goes. Already I am challenging the Foolproof part. And I resent it. Why should the success of my pies have to depend on the embouchure of a chicken sphincter?

The Foolproof Piecrust claims to make enough crust for 2-1/2 to 3 double-crust pies. Mom typed this at the bottom: 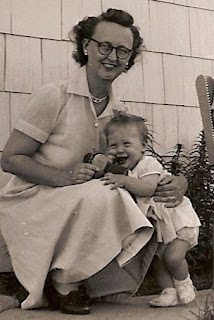 “Mommie’s notes: I probably roll mine extra thin, but I get enough for five double-crust pies.” Holy shit, Mom.

The only reason a person could successfully roll out and transfer pie crust thin enough to read the directions through is that that person is pure of heart and full of goodness. I’ll never be able to do it. But thanks, Mom, for reminding me every year why I loved you so much.

September 7 would have been my mommy’s 99th birthday.