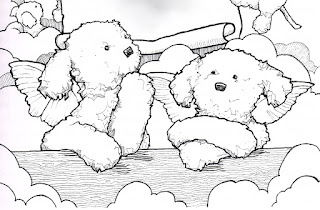 I took some philosophy courses in college. They were fun. There you are, just you and your noodle, batting stuff around. I doubt I’d do as well in philosophy now. My ability to concentrate took off for the corner store years ago and hasn’t come back. Ask me how many angels can dance on the head of a pin, and I’ll start batting away, but my racket’s come unstrung. 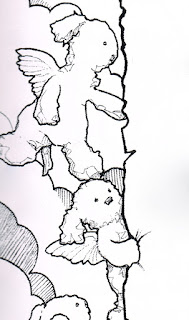 It’s likely that wasn’t meant to be a serious question anyway. These days it’s used to make fun of people wasting time on ridiculously trivial points when there are more important things to think about. Like debating who is the ickiest Democrat of them all when the Republicans are busy burning up the entire planet. But in medieval times some people really did wonder about that angel thing. It was a way of considering the nature of angels, and whether they occupied any space at all. There is some consensus that they do not have a physical nature even though there are all those paintings suggesting otherwise. And that they’re mostly men and chubby babies. What they are instead, it is said, are pure intelligences, and as such any number of them might be able to share a pinhead.

Which is a little silly. Let’s face it: intelligences are not all equal. Some are stronger than others. Why, some intelligences could knock other intelligences right off the pin and take their lunch money. So I would posit that not all the available angels are going to dance on the same pin.

Moreover, I don’t think any of them do. If there were angels on my pins, my sewing would go smoother. This, of course, assumes that any given angel would have some interest in how my quilts turn out, and it’s entirely likely that they aren’t giving it any thought at all. In general, I don’t look to angels for comfort or advice. I can see how somebody might, but I’m too much of an introvert. You can wish for heavenly guidance all day long, but at some point you’re going to have to do the dishes yourself.

So I haven’t spent too much time on the angel density issue. I’m more interested in how many maggots can dance on the eyeball of a deceased rodent. This is of immediate importance to me, because we had a monster hatch of flies here last week. One day, no flies; next day, bazillion flies. Right now there are flies every the hell where around here. There’s some evidence they came up from the basement. We didn’t smell anything, but there might be a dead mouse behind the walls where we can’t see it, and it got some flies all sexed up. With any luck, all the resulting maggots started life at the same time and will also drop dead around the same time. We’ve been hurrying up that process, but we’re getting Swatter’s Elbow. So that’s why I’d like to know how many critters we’re dealing with. Because I’m assuming this is all one litter. 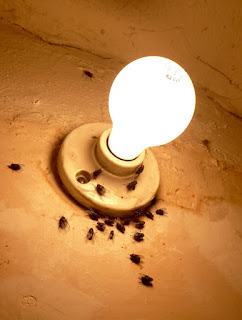 The adult fly, it says here, lives for about 28 days, or as long as a standard uterine lining. We should see a significant decline in a month, then, assuming they don’t get busy again. I can handle a month.

The angels don’t creep me out as much, even though, according to the literature, they demonstrate some serious stalkerish qualities. They can get up on that pinhead and dance all they want, and I won’t object no matter how many of them there are. I figure one good Flying Spaghetti Monster could cream the whole crew.