Are You Ready For Some Basebrawl? 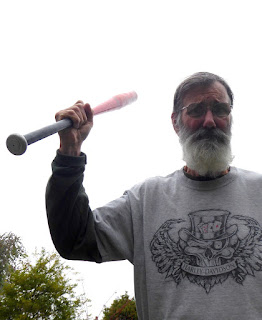 We were at our local Triple-A ballpark watching the Portland Beavers. Or maybe the Portland Mavericks. It was years ago. We were ahead. Or maybe we weren’t. I was distracted.

I don’t like to be distracted. You can watch a lot of baseball without actually watching but every now and then something incredible happens and you’d rather not miss it. Dave wasn’t missing any of it. We’re in the bleachers. And I start to hear something behind me. It was a couple of young dudes, about five rows up. Underage, maybe. But they’ve been knocking back beer for a while, and they’re hollering at our pitcher, who is struggling a little. Basically, they think he’s a bum. Specifically, they think he’s a stupid fucking nigger. That’s the theme. I swivel around and glare hard. It’s not a huge crowd but you can tell everybody is appalled. Nobody’s doing anything about it, though, and glaring pretty much shoots my entire repertoire of aggressive moves. There are two security people at the top of the section, both of them African-American, but they aren’t doing anything either.

By the time I have managed to hone actual daggers out of the vapor between us, and am pretty sure my glare is not survivable, one of them points directly at me and sing-songs “Ooo, lady, are you offended?”


I can’t remember if I said anything at that point, but their next move is to yell at Dave, “Ooo, big guy, your girlfriend is offended. What are you going to do?”


Finally Dave notices something. He’s not sure what. He hasn’t heard any of this but I’m clearly upset and these dudes up in the bleachers seem to be challenging him for some reason. So he stands up and turns around. Seemed like the thing to do, although he’s not sure what the next move is.

Dave is a big guy, but nothing like the man one row down who rises up slowly and turns around. He’s three hundred pounds of solid don’t-even-think-about-it; his own shoulders are a threat to his t-shirt. He had Pipsqueak for breakfast and he’s still peckish. He points at the dudes and tells them it’s time they sat down and shut up.

They sit down and shut up.

Dave turns back around and asks me what the hell is going on. He’s pretty sure, whatever it is, I had something to do with it. I am livid. I’m so pissed off that the dudes wanted to fight Dave instead of me that I’m spitting tacks. Dave does not approve of people my weight class and skill level picking fights and is just about to explain why, when he’s hit square in the head with a nearly full beer as the assholes are making their exit.

Dave has the reaction time of an electron. He’s’ already bolted up the bleachers, grabbed one of the dudes by the shoulders, and spun him around for a little chat, and the dude pushes back. Unfortunately, Dave is not quite squared up and he trips over the bench and tumbles end-over-end back to where he started. It’s horrifying, but before we can ascertain if he broke any bones he kips back upright and thunders up the bleachers again. Ten seconds have gone by. And in that time, the entire section has ignited and fifteen people are pummeling the dudes for all they’re worth. Dave can’t even get a shot in. A very slight bespectacled young man turns toward Dave with a grin for the ages and says “I got him in the kidneys with my binoculars!”

Both security guards continue to stand impassively, chins up, pointedly surveying every section in the stadium but ours, and move just enough to let the young men crawl by them in pulped form on their way out.

Don’t know if they learned anything. But there are some lessons to be learned here.

Dave’s lesson: Smack the snot out of the guy first and ask questions later.

My lesson: Doesn’t matter. I didn’t learn it.

Lesson for the rest of you: the kidneys are at the back, up a little higher than you think.