As The World Churns 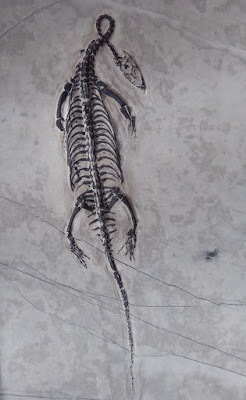 Meet my little buddy Mr. Sneffels. Mr. Sneffels is from China but he doesn’t have a Chinese name because I adopted him and named him myself, after Mt. Sneffels, which I was hiking on the same day I picked him up. Mr. Sneffels is a Keichousaurus hui, and the very youngest he could be is about 201 million years old. Whoever was remaining of the Keichousaurus clan cleared out then, during the Triassic-Jurassic extinction event. May not have been a good idea, but all the kids were doing it.

What a pity, though. He was a marine lizard. He paddled around marshes with his big paddly arms. Had to be cute as the dickens. They even think these guys were born live rather than being shot out in egg form. They’ve found fossilized adult lizards with tiny versions nestled in the pelvic regions, which either means the animal died pregnant, or the tiny version died by being sat on and the larger one perished of grief. Nobody is real sure what caused half of the world’s species to die out 201 million years ago, but the best guess is it was another climate change deal. That stuff is serious. There’s only so much carbon in the world and it moves around over time: in any given era, it might be mostly underground bound up in rocks, or it might be in the air. The first way is good for us and the other way is good for giant termites, and the planet doesn’t care either way, so it’s something to consider if you’re in the process of pumping it out of the ground and into the air. The Carbon Perp at the T-J event was likely to be volcanoes.

This particular kind of fossil is really common. Many of them display the pretzeled neck that you see on poor Mr. Sneffels. It was explained to me that it is a natural event that happens upon death, some sort of rigor mortis thing, although it seems equally likely to me that the unfortunate lizard might have just been looking back to see what got him. 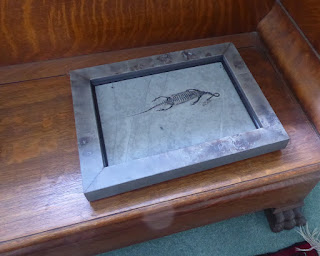 I brought Mr. Sneffels back from the fossil orphanage in Ouray, Colorado. I might have paid too much for him; it’s hard to tell. It’s not the kind of thing Bill Cullen asked about on The Price Is Right. But I’d been in the place many years earlier and was sorely tempted to buy one then, and didn’t, and as soon as I got home I regretted it. So this time I snapped him up. And I haven’t regretted it. I like him bunches. I even had him professionally framed, which I rarely pop for, because I didn’t know how to frame a rock. And I still haven’t hung him on the wall.

He’s heavy, but that’s not the problem. Framing hardware is plenty adequate for his weight. But every time I think about taking him off the top of the desk he’s lying flat on and hanging him on the wall, I think about how he’s going to come crashing down when we get our 9.0 earthquake. I can’t bear it.

Which  is silly. It’s like dreading a flood because it will make you look all pruney. Besides, when we do get our 9.0 earthquake, he’s going to go sailing off the desk he’s on. Or our house will come crashing down on him, or the neighbor’s house will. And it’s even remotely possible that when I’m being jerked back and forth and the house is pancaking all around me, I won’t even give Mr. Sneffles a thought. It’s possible that there are things I care even more about than Mr. Sneffles in the event of an earthquake, including, oh, off the top of my head, my piano and my self.

But I am strangely moved by having custody of a 200+ million-year-old marine lizard. It seems just wrong to have him have gotten this far and then go to smithereens. I feel like I owe him a shot at eternity. But ain’t none of us got that. And maybe the very glory of geology is served by this. Maybe a piece of petrified marsh soil pocked with neat lizards and thrust once again into the daylight after 200 million years deserves to be ground to dust by a major tectonic upheaval. Maybe it’s the best ride we can hope for on our still-living, still-churning planet.