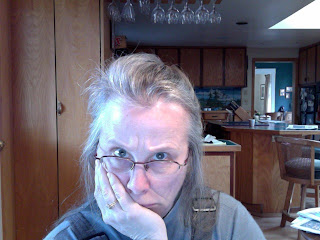 When I was considering buying a Mac, I heard from everybody, and they all said the same two or three things. “You’ll love it,” they chorused. “It’s so intuitive.” The script never changed; it was almost creepy.

So when I got my big shiny iMac, I set it up (pull out of box: plug in) and sat in front of it, and waited for it to demonstrate some of its vaunted intuition. We stared at each other for a while. We were both very quiet. Sometimes it would snap a picture of me. I thought a truly intuitive machine would size me up and then rumble, “You look like a person who’d like to type a blog post. Let me show you around,” but it didn’t. It didn’t really know the first thing about me, which is that I do not like my picture taken.
At some point I recognized that the machine itself, contrary to popular wisdom, is not intuitive, but that I personally will find it easy to operate, because it would work just the way I think it should. My friends, in assuming I will have sound ideas, give me far more credit for clarity than I deserve. In fact, I have a very convoluted method of thinking that only works for me because I don’t much care if I get the right answer.
A while back, Dave watched in disbelief as I tried to put together one of those spatial-puzzle toys, something that was supposed to be a wooden cube when solved. I was at it for at least five minutes and making no headway at all. Finally he seized it from me and snapped it into place in three or four quick movements. “What were you doing,”–he was incredulous–“just banging it together until it came around?” Well, yeah. That was the plan. 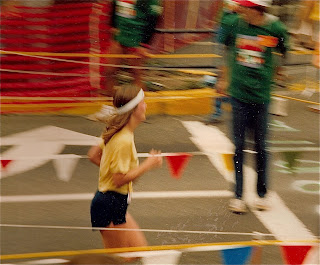 It’s worse when I’m under some kind of stress, such as, for instance, when I’m running, an activity I used to loathe four times a week. I would run up the path on Terwilliger Boulevard, with its distance-markers every .2 mile, and try to distract myself from my wretchedness by calculating my miles per hour.
I’d pass by the marker that said “1.4 miles,” glance at my watch and attempt to come up with elapsed time, summon up the latitude and angle of the sun, and then, once I’d assembled a quorum of data, I would begin to calculate. I would wonder if this gazinta that, or if that gazinta this, and what goes on top and what goes on the bottom, and whether it was really kilometers after all, which would make me instantly over twice as fast, or maybe it’s half. If you listened carefully, you could hear me banging abacuses together in my brain. Ultimately I would conclude, as I finished the loop and bent over, huffing miserably, that I was running at a pace of 42.6 miles per hour, which I thought was pretty dang good. It would not occur to me for hours, if at all, that I may have introduced a flaw.
So this is the sort of logic that my new computer is expected to understand. The machines are, indeed, different in their approaches. Take the little issue of putting a document to bed. With my old PCs, I would ask if it could put my file away.
“This file here?” it would query. Yes.
“You want to put it away?” Yes.
“Hum. Hum. Hum. What do you want to call it?” Gosh, I don’t care. What do you suggest?
“We could take the first sentence and whack it down the middle and call it that. That would be a nice name. I just need something to sew in its underwear so it doesn’t get lost. Okay with you?” Sure, sure, whatever.
“So where do you want it?” I don’t know. Where do you suggest?
“We could put it here, here, here, or way over here where you don’t have anything at all. It’s all the same to me. I have a lovely little location in a cul-de-sac over here where it will be really, really safe. You’ll probably never find it again. Ha! Ha! Whaddya say?” Sure. As long as it’s safe.
“All righty then. Click click. Thump thump. Braaaaa-aaaaap. Gone!” Bring it back. I just thought of something.