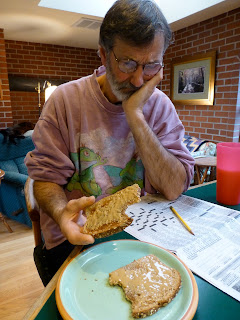 Dave bought peanut butter last March and has been complaining about it ever since. It was a Costco purchase, though, so at least we had a whole lot of it. He soldiered through it, sandwich after sandwich, griping all the while. Presumably we could have thrown it out or given it away or made bird food out of it but none of that occurred to us, because we both have Acquired Great Depression Syndrome. It’s different from our parents’ original GDS. For instance, I have no problem squandering a hundred bucks on a dinner, but I’ll unfold dried used Kleenex and use it again. There was probably a generation brought up in the ’80s that tosses stuff away willy-nilly, but now we have a whole new generation that is frugal out of necessity, many members of which economize on laundering.

Anyway, Dave finally got through the peanut butter sometime in September and no sooner was the jar rinsed and in the recycling bin than we got a little postcard in the mail. It was a recall notice for peanut butter purchased in March. Because of salmonella. “I knew I had a touch of being violently ill for the last six months,” Dave said. Everything makes sense in retrospect, which is where most of us live.

It is an interesting thing about human beings that we grow up accumulating quirks and addictions and coping mechanisms, and then we spend much of the rest of our lives trying to solve ourselves. Maybe we’re not nuts; maybe we just got into some bad peanut butter. Our storyline changes throughout the years depending on prevailing villains, of which there is a constant supply. That’s it, we say. That’s why I’m this way. It’s because of my mother. Or wheat. Even if we can’t fix anything, it feels better to have constructed a rationale. And it’s easier to come up with reasons for being an asshole, say, than to just quit being an asshole. 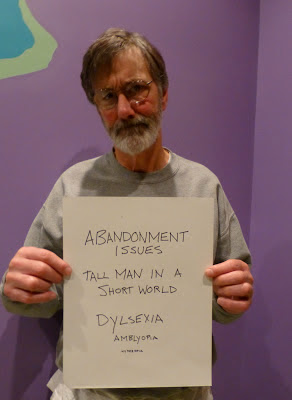 By the time we’re fully grown adults, we have assembled a whole instruction kit to go with ourselves, and we socialize by reciting it to each other. We read each other our own captions. “Middle child and a vitamin D deficiency,” we’ll say, shaking hands, and our friend will reply “dude! Undiagnosed Lyme Disease and attachment anxiety. Beer?” and the party is on. No matter how bad things are, we always feel better with a good explanation. It will evolve over time, as new discoveries present themselves and make the rounds in the talk shows and the internet. Chronic fatigue gives way to fibromyalgia, which gets pushed aside by food allergies. By age forty, most of us have a serviceable working narrative. We’ve pinpointed our positions on the autism spectrum and have located dietary culprits and genetic predispositions, and any unsettled foibles can be addressed at our next doctor’s visit, because we’ve jotted down a number of pharmaceutical wonders that just might be right for us.

It makes sense to try to puzzle out the things that trouble us, especially if it leads to a plan to fix things. Every now and then we even achieve a breakthrough. But sometimes our habit of introspection does us in. We reanimate our own anxiety until it’s permanently coiled up and ready to strike. It spins and it spins. A person can have all kinds of good reasons to be fearful but the fear itself rarely helps anything. We might as well let it go if we can, because it all spins out of the same place, and there’s no fixing it. Sometimes things run smooth and sometimes crunchy, but we’ve all got only so much peanut butter, and then we’re going in the recycling bin.