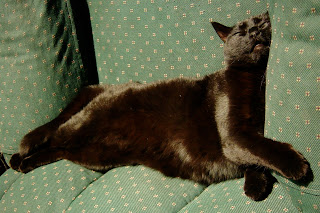 My current cat Tater and I differ more ways than we are alike. She can leap to a five-foot countertop in a nonchalant second; I fell on my fanny trying to execute a three-inch hop on Leap Day. She nods off between naps; I pound out novels in the middle of the night for no remunerative reason. She has perfect, velvety paw pads; I have a Plantar’s wart. She doesn’t like ice cream or beer; I’m not nuts. She walks around presenting her ass like it was the Hope Diamond, and I haven’t done that for decades. Sometimes we connect unpredictably. She gazes at me with yellow, unblinking eyes that say: I really like having you around, but don’t expect too much. I feel the same way. It’s an easy relationship. She rakes her head against my ankle and I toss crackers in her bowl once a day. 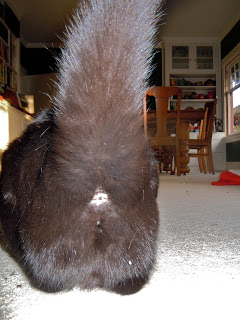 One time we decided to take Tater to the mountain cabin with us. We reasoned it would be slightly nicer for her to have us around for three days than to leave her on her own, because she is very social. Tater had never set paw outside the house after her first kittenly vet visit. It’s been five years. Birds are TV to her–endlessly entertaining, and off-limits as snack items. That’s the rule.

“What can go wrong?” I asked Dave, who gave me that look that means: when we find out, it isn’t going to be his fault. We bundled our stuff into the car, with Tater blasting around the house as is her habit when she sees a suitcase come out, and at the last minute we picked her up and took her to the car. After we unhooked her from the mid-epidermal layer of my shoulder, we took off. Tater located a two-inch slot under the front seat, wedged into it like a wafer of fur, and yowled WAH-WAH-WAH-WAH-WAH for forty miles. 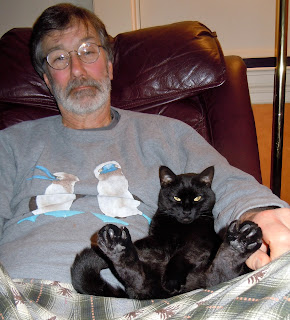 Once we’d arrived at the cabin, and put in all our stuff plus the litter box, we brought in the cat. She did a thorough exploration of the place in a minute. An electron would have missed more. Same thing happened when we brought her home from the Humane Society the first time. “Your kitty will be cautious at first. Leave her in her opened crate in a single room until she’s had a chance to adapt. Then, gradually, make other rooms available.” Tater torpedoed out of the crate and did a reconnaissance of all three floors, rolled over for a belly rub, and then took off again to leave cheek marks on all the perimeters of her new territory. If there was room for a moth to flap in that house, she knew about it within five minutes.

So it was the same thing with the cabin. A minute of pandemonium, then it was Happy Kitty. Sofa Leopard, Chair Leopard, Defender Of The Woodpile, Strider Of The Countertop. Home. All was well.

I recognized this. We have more in common than I’d realized. Everywhere in life I find myself, I’m fine. Am I thirty now? No problem that can’t be solved by more beer and bigger pants. My forties? No worries. Then I fetch up in my fifties with no eyebrows, and some of the other nouns are missing, too. Oh well–there’s comedy in that. 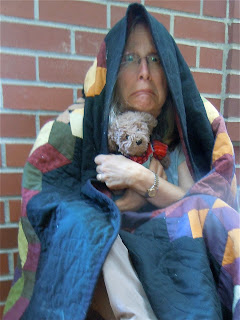 But the transitions–the lurches–the moments when I realize that those kids in the coffeehouse think I’m a fossil hippie, those times when my train of thought derails four words in, the mornings I notice my skin isn’t even attached in places, the sudden apprehension that I’m not getting out of this gig alive–WAH-WAH-WAH-WAH-WAH. I can adjust, do the reconnaissance and settle down in a hurry. Don’t make me go in the car again.