A Bird In Hand 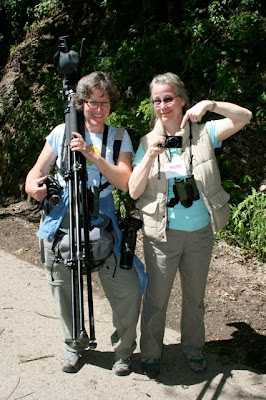 If you want to be a real bird-watcher, you’ll need to get up earlier than you want to, strap on a bra for your binoculars, and assume a position favored by the Mercenary Chiropractors of America. If you’re an Oregonian plunked into the middle of a forest in West Virginia, prepare also for episodes of insomnia brought on by imaginary ticks. There’s really no reason to engage in this pursuit. Except there’s birds.

There are an insane number of them at the New River Birding and Nature Festival, and they’re festive, all right. Good binoculars and a good trip leader will act like a prism, and splinter those nondescript Little Brown Jobs into rainbow colors. They are suited up, slicked back and strutting like it’s Saturday night. The ladies don’t stand a chance. The ladies are considerably duller, not to say they’ve let themselves go. But it’s the males we’re most likely to see. 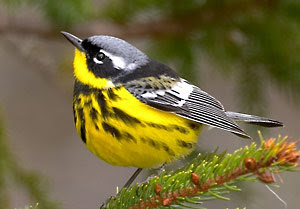 They are slathered in bling, or “field marks,” as the birders call them: necklaces, crowns, wing bars, tail spots, eyebrows, executioner’s hoods, or rump patches (the rump is always the first thing to wear out). Or, in the case of the Magnolia warbler, all of the above. In fact, in the right light, you can just about make out the sequins and propeller beanie on a good Magnolia. Let’s just say these boys are something to see. You might not see them unless you pish them off. They’re just dots in the treetops most of the time, but in spring they go all West Side Story and zoom in close to see if your ass needs kicking. Once they get a load of your binocular bra, geeky duds and mouth hanging open, they go away again. You’re no threat.
In theory, their songs are distinctive. I can’t make them out, but accomplished birders can, and the birds are even better at it. Birds are able to distinguish many more notes than we are. If you slow down the recording of a bird song by half or more, you can hear them more clearly: “so I told Bob, I said, dude, I said, dude, I said, oh my gawd, check out the wing linings, dude, I mean totally, totally,” when all we can hear at normal speed is “blah, blah, blah.” 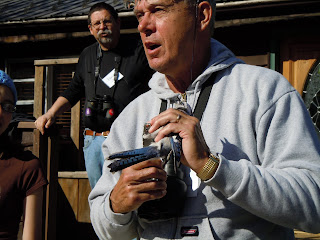 We also had a bird-banding demonstration from Bill Hilton, Jr., Hummingbird Czar, which was very educational, although watching him gesture with a bird in hand was a little off-putting, especially when he was feeling emphatic. He insists that the birds being trapped and handled feel no stress, because they are not like humans, and do not fret about how to pay the mortgage. Which is true; they’re admirably calm about the whole mortgage issue. I would say, however, that we might approach the stress question scientifically, using Bill himself perhaps, scooped up by a giant, waved about, blown on, and stuffed into a tube head first. Then reassess. 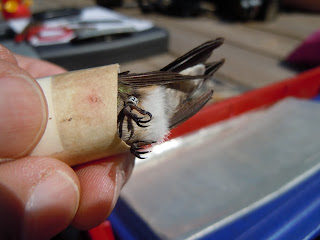 You blow on a bird to lift its feathers and reveal details such as its sex and maturity. Turns out birds are totally naked underneath and that whole breast-feather ruse is just a big comb-over. See, I didn’t know that until Bill blew his birds.
Bill was also able to feed a held hummingbird so that we could watch its head ripple on top. That rippling would be his tongue forking in the back and sliding up into his skull as he laps nectar. A nice brain massage probably relieves that stress they don’t have, too. 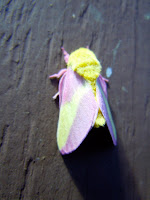 Much can be learned by banding birds and tracking their movements, which is why you should always report it if you should accidentally Honda a banded bird. Somebody somewhere wants to know where it got flattened. There are different-size bands for different-size birds. On hawks, you just mark them with a Sharpie. (A little birder humor, there. The rest of you just talk amongst yourselves.) 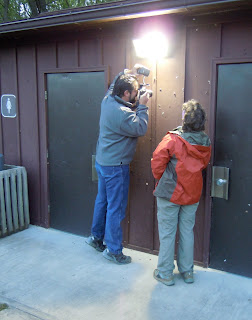 Birders tend also to be interested in other living things–plants, critters. And this is also a Nature festival. Still, I was taken aback when my friend Debbie pointed straight at me first thing in the morning and announced “You need to go to the bathroom.” No one has said those exact words to me since I was three. Was it that obvious? But she was merely alerting me to the night light on the outdoor biffy that attracted some lovely moths every morning for our perusal. And after a couple days, you get used to emerging from the potty into a phalanx of photographers.
I learned a lot. I may never master the category of Variants and Vagrants, defined as birds that show up looking all wrong where they have no business being. But I probably learned a hundred new birds, and if it weren’t for the hole in my head I had the foresight to drill with drugs and alcohol in my twenties, I’d still remember them.
Of course, none of them live in Oregon.
By Murr Brewster|2021-11-09T21:29:04-08:00May 12, 2010|Uncategorized|21 Comments