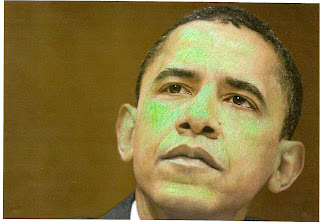 We’ve all heard of the “Birthers” by now, and isn’t it fun? It’s like when they found a group of Cro-Magnon people in some isolated island somewhere a while back. Here, in the face of all modernity, was a tribe of ancients who had not evolved in a significant manner since the Stone Age. And now here–right here!–in the middle of an America that had sent a man to the moon forty years ago is a tribe of Birther people without advanced cognitive abilities and who yet are able to lope off to the Burger King and bring down a Whopper.

The Birthers believe that we have recently elected as President a man who is not a bona fide American citizen, because he was of foreign birth. Hawaii is a little out there, for sure, but most of us recognize it as a state. So we think of him as being a little more pineapply than the rest of us but otherwise true-blue. The odd thing about the Birthers is that their numbers coincide neatly with a segment of America that, until recently, did not care where or how their President was born, as long as he claimed to have done it twice. So this is new.

Most of us get a chuckle out of the Birthers, and speculate as to whether they came about as a result of inbreeding or whether they’re the product of a long-underfunded educational system. But the main thing about the Birthers is that they have totally missed the big picture. Even if Hawaii were a real state, which is in dispute–real states raise wheat–it only became a state less than two years before our President claimed to have been born there. The gestation of a human is nine months, reputedly, but aliens have been known to gestate for far longer. And that’s the issue. It’s not that Barack Obama is a Kenyan. He is out of this world. He has a six-foot wife who wears hot pink. His children are a little too perfect. He never acts perturbed no matter what the provocation. His ears stick out. Something’s not right here. The Birthers may have the details wrong, but they’re on to something.

Pay close attention to the issue of whether or not we should send a man to the moon. Please note that it is always a generic man who is proposed, and not someone specific like Lou Dobbs. So there is no pressing need to blast anyone off. The reason usually given is that we were all so inspired when we sen 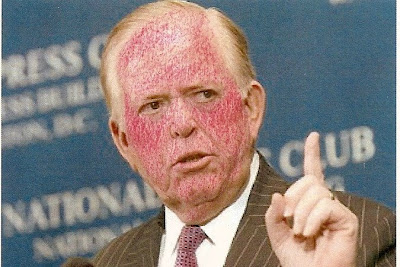 t a man to the moon forty years ago–what could possibly be more inspiring than to see if we can do the whole thing all over again, especially after all those years of underfunding the educational system? Gosh, not much.

I personally agree with a number of scientists out there who believe that it would be a lot more fun and way less expensive to send off a bunch more of those little golf carts that creep about the Martian landscape going eep eep eep and find out all sorts of compelling scientific stuff. But, instead, we are being urged to fire off another random man to the moon who is not Lou Dobbs, and at great expense. Someone doesn’t want us to find the true birth certificate. Someone doesn’t want us to go to Mars and come nose to probe with a race of men of color. Green, or whatever.