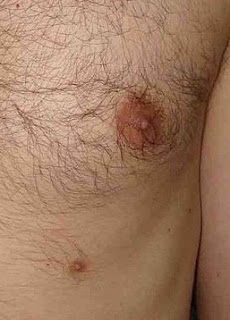 Friend and loyal reader Tom K was intrigued by my offhand mention of a third nipple in a recent blog post about sewing. He latched onto it, as it were, and soon discovered that third nipples are not that uncommon.

Extra nipples usually show up in what is called the “milk line,” or a line of embryonic tissue corresponding to where the nipples show up on your pet mammal. They’re not usually quite as fancy and involved as the ones used in advertising. They might look like moles.

Men’s nipples are generally considered to be useless, but in fact a man can lactate, in the right mood. That mood being if he’d been put on Thorazine, or had a pituitary tumor, or had a baby suckling on him night and day for a few weeks, or was a Dayak fruit bat. These are all pretty specific moods.

People wonder why men even bother having nipples, unless they’re Dayak fruit bats where that kind of thing is just expected; and the answer is that early on, both male and female fetuses are pretty much alike, and the male fetus is just holding onto the possibility of being female, until it has to give up its aspirations and live out a life of anger and resentment.

(Similarly, females still retain a little bit of the vas deferens sperm chute too, although they have been socially conditioned not to ejaculate, especially in the boardroom.)

Truthfully, though, even lactating women don’t have much call for a third nipple, and it seems like as long as we’re tossing in extraneous items we could get a little more creative. Everyone remembers seeing that poor mouse with a human ear on its back. If you’re going to have an extra ear–and you could make a case for that–you wouldn’t want it on an unrelated mouse. You’d want it on top of your head so you can hear an Acme safe coming.

I believe someone grew the ear on the mouse on purpose to give it to someone else later. There is a man who had a second nose grafted onto his forehead to replace his own damaged one. There are people with two heads. And many people have been born with extra limbs. If I had an extra arm I’d want it in the back and use it just for wiping. But in a society that gets worked up about visible panty lines, such an innovation is not likely to take off. 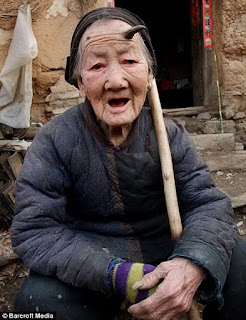 A number of people have grown horns, usually on their heads. For some reason many of them are Chinese and old. One woman named Zhang Ruifang grew a decent horn out of her forehead and the beginnings of a second, right where you’d want it, on the other side. She was 101 years old and pretty chuffed about the whole thing, although I imagine she’d have preferred a matched set. She had no interest in removing them. It is a tribute to her culture that a woman who has horns and might be immortal was not abused in any way. Most of your historic Christian communities would have had those horns removed at the stake.

I’m not wild about my eyebrow mole, but a real, committed horn would be cool. Not those sissy unicorn horns, either. You stick a drill bit on a horse and people just go all to pieces. And all the glitter that comes with it is a nuisance. No. I want a bugle right on my forehead. You show up unprepared for an argument with a bugle on your forehead, you’re still going to win.